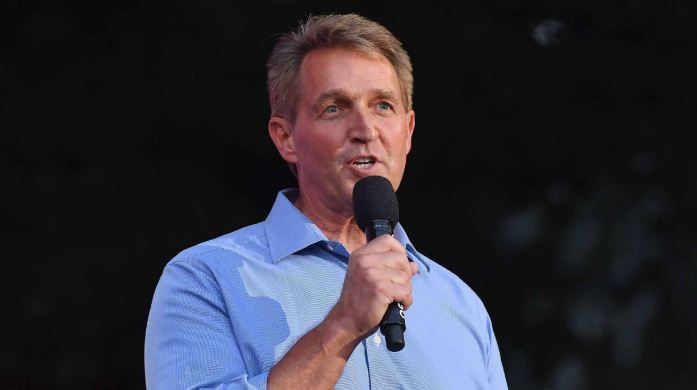 When Jeff Flake added a fresh twist to the saga over Brett Kavanaugh's nomination to the US Supreme Court last Friday, the Arizona senator was following a pattern that has seen his profile soar during the Trump presidency -- and added to speculation that he could be a challenger in 2020.

The 55-year-old Republican, who is retiring from the Senate at the end of the year, at the last moment made an FBI investigation into allegations of sexual assault against Kavanaugh a condition of his voting the nomination out of the judiciary committee to the full chamber.

Flake made the decision after consultations with Democrats, including fellow judiciary committee member Chris Coons, and other wavering Republicans, and was influenced by a confrontation in a Senate elevator with two victims of sexual assault.

"I couldn't move forward without hitting the pause button," Flake told '60 Minutes' on Sunday. "Because, what I was seeing, experiencing, in an elevator and watching it in committee and just thinking, this is tearing the country apart."

Flake was effectively the swing vote on the 21-person judiciary committee.

The demand for a week-long investigation frustrated his 10 fellow Republicans who didn't want further delay to a full vote and the 10 Democrats who hoped he would vote against Kavanaugh, but the "pause" has been broadly welcomed as the right thing to do.

That decision fits with Flake's words and actions over the past two years.

The senator has sharply criticized Trump's trade tariff policy as well as his stance on immigration and the media, while supporting traditional Republican policies like tax cuts. With the Kavanaugh "pause," he has placed himself firmly in the national spotlight.

"I could never warm to the president. Long before he ran, he talked about President Obama not being a citizen. I thought that itself is disqualifying," Flake said in Boston on Monday. "You cannot do that. And then talked about John McCain in a derogatory way. Then talked about Mexicans in a derogatory way. I just think that we've got to do better than that. We can't refer to our opponents, political opponents on the other side of the aisle, as losers and clowns."

Flake opted not to run for reelection in Arizona after finding his brand of conservatism out of step with the Trump agenda -- and that he was unlikely to win, especially after the president supported a primary challenge in Arizona and described Flake as "toxic."

Over the past two years Trump and Flake have clashed frequently, fueling speculation that Flake could make a run for the presidency in 2020.

Flake offered a refutation of Trumpism in 'Conscience of a Conservative: A Rejection of Destructive Politics and a Return to Principle,' a book published last year, and on Monday was making his way across New England with stops in Massachusetts and New Hampshire, the first primary state.

On the road on Monday, Flake reiterated that he believed Trump should face a primary challenger in 2020. Like fellow Republicans Ohio Governor John Kasich and Nebraska Senator Ben Sasse he refused to rule out making challenge himself, but suggested it was unlikely.

"I've said that I do hope that somebody else runs in the Republican primary," Flake said in Boston. "The Republican Party is the president's party right now. But it won't always be. And it can't be if we're going to be a major political force in the future."

"I don't see that happening in my case," he added. "I will give a speech in New Hampshire tonight. But just if nothing else, in memoriam of what a Republican Party should be."

When he did speak in New Hampshire, it was to hit out at "tribalism" which he said was "tearing our country apart."

"I've been failing my tribe for some time now," he added. "I hope to continue to fail my tribe."

The remark was an acknowledgement of the position he finds his brand of Republicanism -- stuck between two warring sides, and making limited headway in efforts to bridge the gap.

In his '60 Minutes' interview, Flake accepted that had he been running for reelection there was "not a chance" that he would have been able to call for an investigation into Kavanaugh.

And while Flake has said that the judge cannot be confirmed if he is found to have lied, unless concrete evidence is exposed his next vote may well be in line with other Republicans.

In this hyper-partisan environment, it remains unlikely that there is a big enough market for Flake's moderation to make an electoral impression -- either as a challenger to Trump in the primaries or as an independent in the general election.