One person who went missing from a Colorado River rafting trip in the Grand Canyon during a flash flood was found dead Thursday in frigid water while a second person was found alive, a park spokeswoman said. 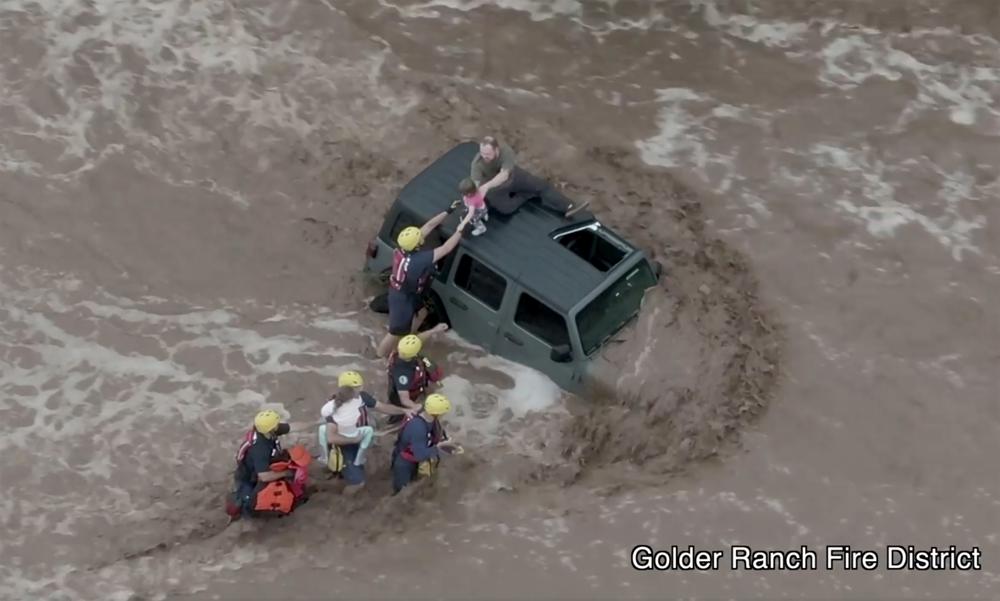 This drone image provided by the Golder Ranch Fire District shows firefighters safely rescue a man and his two daughters from the roof of their vehicle after it was swept away in fast moving water just north of Tucson, Ariz., on Wednesday, July 14, 2021. (Photo: AP)

The flood was part of monsoon storms that have inundated Arizona this week, including in Flagstaff where city streets were left a muddy mess as water mixed with logs and debris swept through. Cleanup was underway Thursday with the threat of more rain looming.

At the Grand Canyon, a torrent of water rushed through a slot canyon and washed away the camp where two commercial rafts with 30 passengers pulled off the river to stay Wednesday evening, said Grand Canyon spokeswoman Joelle Baird.

Authorities initially believed that two people had been swept into the river and launched a search by air, ground and water to find them. One was found at the camp that the group had abandoned to seek a safer place to sleep, Baird said. The other was found dead in the water next to the camp that flooded, she said.

Park officials have not released the rafters' identities. Baird declined to release the rafting company's name, saying the park has a policy not to out of respect for commercial use permit holders.

A park helicopter took two paramedics to the river late Wednesday to treat and stabilize the injured rafters after receiving a satellite phone call from someone on the trip asking for help. Several passengers who were injured were airlifted out of the canyon, Baird said. She wasn't sure of the extent of their injuries.

Baird said the park will help the other rafters who want to cut their trip short get off the river, she said.

The flood hit the camp set up about 40 miles (64 kilometers) downstream from where the rafts launched at Lees Ferry near the Arizona-Utah state line. Forecasters had issued a flash flood watch for the area Wednesday, but it's not clear whether the rafting guides were aware.

Radar showed about an inch (2.5 centimeters) of rain along that stretch of the Colorado River, according to the National Weather Service.

The entire Southwest, which has been desperate for rain after two years of dismal monsoon activity, has been hammered lately with storms. More rain is in the forecast.

In Tucson, a fire department swift water team rescued a father and his two daughters from the roof of their vehicle Wednesday after they drove into a usually dry wash and got stranded in the floodwaters, said Golder Ranch Fire District spokesman Capt. Adam Jarrold.

"Our message, telling everybody, be patient, especially here in the desert," he said. "The water comes up quick, but it also goes away quick."

Farther north in Flagstaff, floodwaters have inundated communities in the shadow of a mountain that burned in 2019 and adjacent neighborhoods, sending at least one vehicle floating down a city street. Residents had been somewhat prepared for a major flood with sandbags around their homes and concrete barriers to redirect water. Still, many of them have been digging out.

Flagstaff likely can recoup some of the costs for responding to and repairing flood damage related to wildfires under a recent state law. Cities also can be reimbursed for providing emergency shelter and support for people who are displaced, but it does not allow spending to repair individual homes.

The threat of flash flooding will remain through next week, the National Weather Service said, though the coverage will be more scattered than widespread.

"The moisture is not going anywhere, and it will heat up as well, so those are perfect ingredients for thunderstorms in the afternoon and evenings in Arizona," said Evan LaGuardia, a meteorologist in Flagstaff.