WORLD Flooding in central Appalachia kills at least 8 in Kentucky

Flooding in central Appalachia kills at least 8 in Kentucky 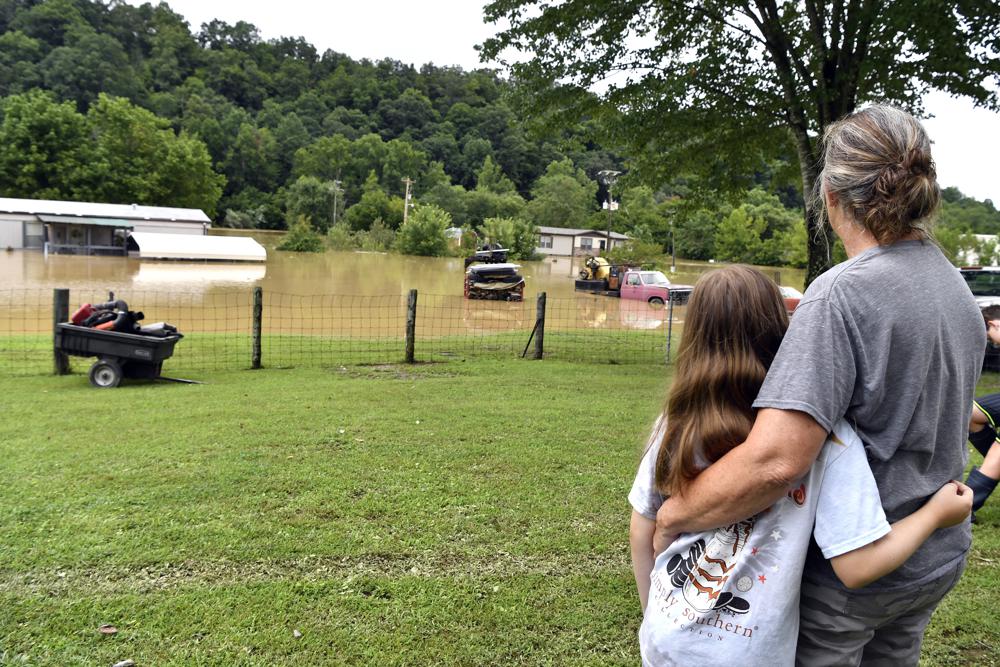 Bonnie Combs, right, hugs her 10-year-old granddaughter Adelynn Bowling watches as her property becomes covered by the North Fork of the Kentucky River in Jackson, Ky., Thursday, July 28, 2022. Flash flooding and mudslides were reported across the mountainous region of eastern Kentucky, where thunderstorms have dumped several inches of rain over the past few days. (AP Photo/Timothy D. Easley)

Torrential rains unleashed devastating floods in Appalachia on Thursday, as fast-rising water killed at least eight people in Kentucky and sent people scurrying to rooftops to be rescued.

Kentucky Gov. Andy Beshear tweeted Thursday evening that the state’s death toll from flooding had risen to eight. He asked for continued prayers for the region, which was bracing for more rain.

“In a word, this event is devastating,” Beshear said earlier in the day. “And I do believe it will end up being one of the most significant, deadly floods that we have had in Kentucky in at least a very long time.”

In Breathitt County in Kentucky, Krystal Holbrook’s family raced against surging floodwaters in the early morning hours to move possessions to higher ground. Their ordeal began around 4 a.m. Thursday, as they scurried in the dark to move vehicles, campers, trailers and farm equipment. But as the water kept rising throughout the day, the concern was that “higher ground is getting a little bit difficult,” she said.

“It looks like a huge lake back here,” she said.

Beshear warned that property damage in Kentucky would be widespread. The governor said officials were setting up a site for donations that would go to residents affected by the flooding.

“We’ve got a lot of people that need help that we can’t get to at the moment,” Beshear said. “We will.”

Flash flooding and mudslides were reported across the mountainous region of eastern Kentucky, western Virginia and southern West Virginia, where thunderstorms dumped several inches of rain over the past few days.

With more rain expected in the area, the National Weather Service said additional flooding was possible into Friday in much of West Virginia, eastern Kentucky and southwest Virginia. Forecasters said the highest threat of flash flooding was expected to shift farther east into West Virginia.

Poweroutage.us reported more than 31,000 customers without electricity in eastern Kentucky, West Virginia and Virginia, with the bulk of the outages in Kentucky.

“There are a lot of people in eastern Kentucky on top of roofs waiting to be rescued,” Beshear said earlier Thursday. “There are a number of people that are unaccounted for and I’m nearly certain this is a situation where we are going to lose some of them.”

“We’re just in the rescue mode right now,” Stacy said, speaking with The Associated Press by phone as he struggled to reach his office in Hazard. “Extreme flash flooding and mudslides are just everywhere.”

The storms hit an Appalachian mountain region where communities and homes are perched on steep hillsides or set deep in the hollows between them, where creeks and streams can rise in a hurry. But this one is far worse than a typical flood, said Stacy, 54.

“I’ve lived here in Perry County all my life and this is by the far the worst event I’ve ever seen,” he said.

Roads in many areas weren’t passable after as much as 6 inches (15 centimeters) of rain had fallen in some areas by Thursday, and 1-3 more inches (7.5 centimeters) could fall, the National Weather Service said.

Beshear said he has deployed National Guard soldiers to the hardest-hit areas, and three parks in the region were opened as shelters for displaced people.

Perry County dispatchers told WKYT-TV that floodwaters washed out roads and bridges and knocked homes off foundations. The city of Hazard said rescue crews were out all night, urging people on Facebook to stay off roads and “pray for a break in the rain.”

Communities in southwest Virginia also were flooding, and the National Weather Service office in Blacksburg, Virginia, warned of more showers and storms on Thursday.