A storm swamped New Orleans streets and paralyzed traffic Wednesday as concerns grew that even worse weather was on the way: a possible hurricane that could strike the Gulf Coast and raise the Mississippi River to the brim of the city's protective levees. 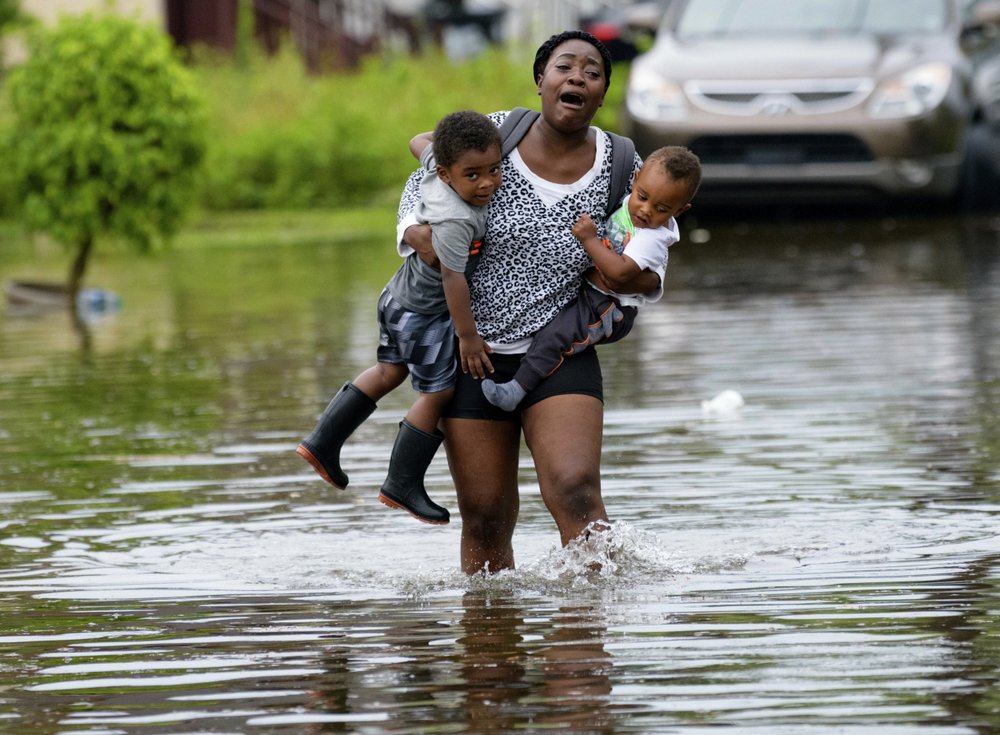 Terrian Jones reacts as she feels something moving in the water at her feet as she carries Drew and Chance Furlough to their mother on Belfast Street in New Orleans during flooding from a storm in the Gulf Mexico that dumped lots of rain Wednesday, July 10, 2019. (Photo: AP)

The storm was associated with an atmospheric disturbance in the Gulf that forecasters said was on track to strengthen into a hurricane by the weekend. The National Hurricane Center expected the system to become a tropical depression by Thursday morning, a tropical storm by Thursday night and a hurricane on Friday.

Lines of thunderstorms ranged far out into the Gulf and battered New Orleans, where as much as 8 inches (18 centimeters) of rain fell over a three-hour period, officials said.

Mississippi and Texas were also at risk of torrential rains.

In New Orleans, streets turned into small, swift rivers that overturned garbage cans and picked up pieces of floating wood. Water was up to the doors of many cars. Other vehicles were abandoned. Kayakers paddled their way down some streets.

At one point, the storm prompted a tornado warning. The National Weather Service planned to investigate apparent wind damage to at least one house on Bayou St. John, a channel extending from Lake Pontchartrain.

Chandris Rethmeyer lost her car to the flood and had to wade through water about 4 feet (1.22 meters) deep to get to safety. She was on her way home after working an overnight shift when she got stuck behind an accident in an underpass and the water started rising.

"I was going to sit in my car and let the storm pass," she said. "But I reached back to get my son's iPad and put my hand into a puddle of water."

Valerie R. Burton woke up to what looked like a lake outside her door.

"There was about 3 to 4 feet of water in the street, pouring onto the sidewalks and at my door. So I went to my neighbors to alert them and tell them to move their cars," she said.

Gov. John Bel Edwards declared a state of emergency and said National Guard troops and high-water vehicles would be positioned all over the state in advance of more heavy rain.

"The entire coast of Louisiana is at play in this storm," Edwards said.

Forecasters said Louisiana could see up to 12 inches (30 centimeters) of rain by Monday, with isolated areas receiving as much as 18 inches (46 centimeters).

The additional rain could push the already swollen Mississippi River precariously close to the tops of levees that protect New Orleans, officials said.

A spokesman for the Army Corps of Engineers in New Orleans said the agency was not expecting widespread overtopping of the levees, but there are concerns for areas south of the city. The weather service expects the river to rise to 20 feet (6 meters) by Saturday morning at a key gauge in the New Orleans area, which is protected by levees 20 to 25 feet (6 to 7.6 meters) high.

The Corps was working with local officials to identify low-lying areas and reinforce them, he said. He cautioned that the situation may change as more information arrives.

"We're confident the levees themselves are in good shape. The big focus is height," spokesman Ricky Boyett said.

New Orleans officials have asked residents to keep at least three days of supplies on hand and to keep their neighborhood storm drains clear so water can move quickly. As the water from Wednesday morning's storms receded, people worried about what might come next.

Tanya Gulliver-Garcia was trying to make her way home during the deluge. Flooded streets turned a 15-minute drive into an ordeal lasting more than two hours. She was supposed to head out of town for a weekend trip but now wonders whether the flights will take off.

Wednesday's flooding was reminiscent of floodwaters that surprised the city during an August 2017 rain. That flood exposed major problems at the agency overseeing street drainage. It led to personnel shake-ups at the New Orleans Sewerage and Water Board and required major repair efforts.

On Wednesday, the board said 118 of 120 drainage pumps were operational and the agency was fully staffed. But the agency's director says that much rain in such a short time would have overwhelmed any drainage system.