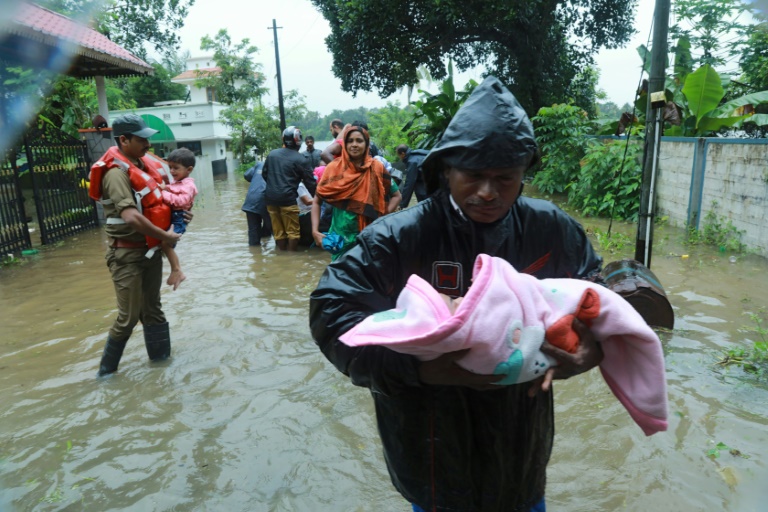 Thousands of kilometres (miles) of roads and hundreds of homes have been damaged or destroyed by floods that have ravaged Kerala during the monsoon (Photo: AFP)

Flights in and out of the Indian tourist hotspot of Kerala were cancelled for three days Wednesday as severe monsoon flooding ravaged the region.

At least 39 people have been killed in the past three weeks and more than 50,000 displaced in an area famed for its palm-lined beaches and tea plantations.

Authorities have opened the gates of 34 reservoirs as water reached dangerous levels.

Hundreds of villages have been flooded and the military has been called in to help with rescues.

More than 10,000 kilometres (6,000 miles) of roads and hundreds of homes have been destroyed or damaged across the state, officials said.

Kerala Chief Minister Pinarayi Vijayan's office announced on Twitter that Kochi International Airport -- the main gateway to the region -- would be closed until Saturday "due to heavy rains and resultant flooding."

A heavy rainfall "red-alert" has been issued across much of the state, which is home to around 33 million people, the official added.

"Our state is in the midst of an unprecedented flood havoc," Vijayan said earlier this week. "The calamity has caused immeasurable misery and devastation."

The US embassy last week advised Americans to avoid Kerala, which drew more than one million foreign tourists last year, according to official data.