Floods force over 10,000 displaced Yemenis to flee from shelters: UN

Farhan Haq, the deputy spokesman for UN Secretary-General Antonio Guterres, said that while it is too early for casualty estimates, the destruction of homes, relief supplies and other property has been reported.

Emergency assistance is being mobilized for the worst affected areas in Abyan, Marib, Amran, Saada, al-Jawf, Ibb and al-Dhale governorates.

Heavier than usual rains have battered Yemen this year, which is worsening an already catastrophic humanitarian situation that includes the growing risk of famine, the devastating impact of COVID-19 and other challenges, the spokesman said, adding that more rain is expected in the coming days.

Yemen, in the fifth year of a civil war, is suffering from what was dubbed earlier as the world's worst humanitarian crisis.

Haq said the Yemen relief response plan is only 21 percent funded. Cuts to donor funding are forcing core programs to close or reduce support across sectors, including food, water, health and nutrition. 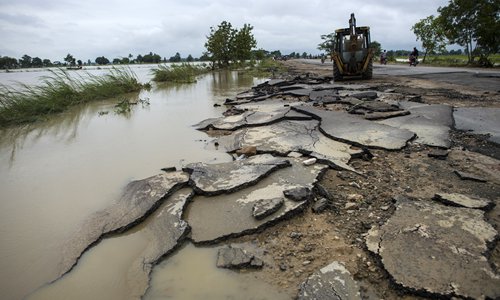