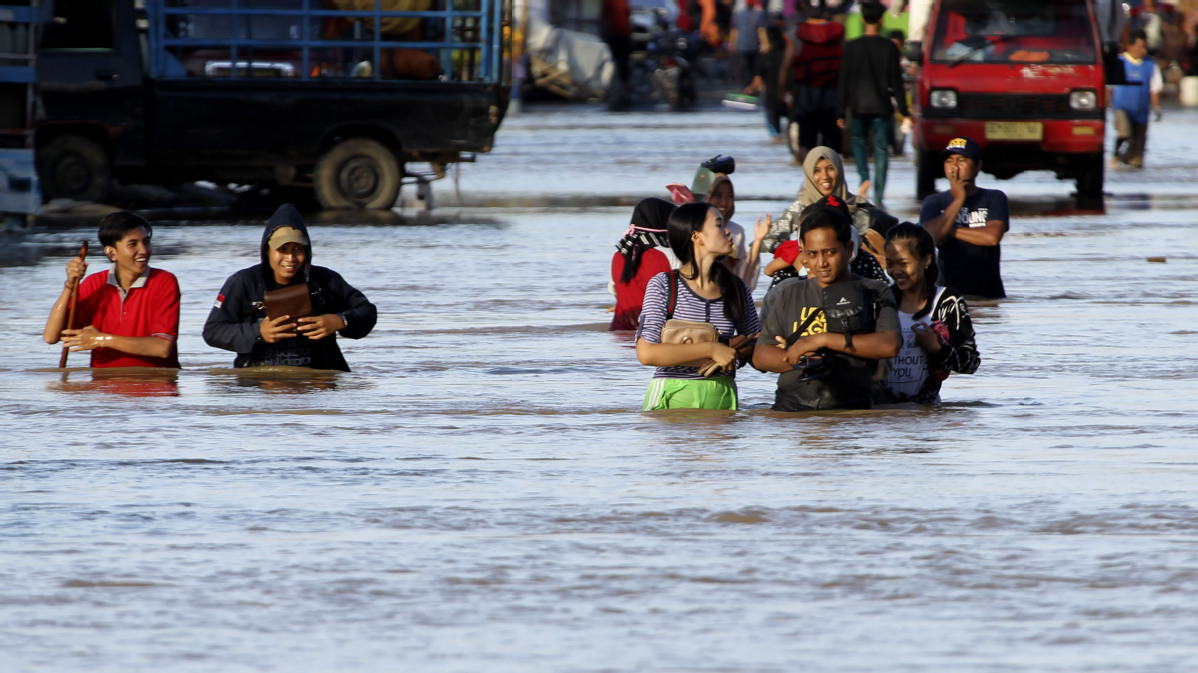 People carry their belongings through the floods in Bengkulu, Indonesia, on Sunday. (Photo: Xinhua)

Floods sparked by torrential rains have killed 31 people in Indonesia and more than a dozen are still missing, officials said on Monday, marking the latest calamity for a disaster-prone nation, Xinhua News Agency reported.

Landslides and floods are common, especially during the monsoon season between October and April, when rains lash the vast Southeast Asian archipelago.

On Monday, an official of Indonesia's disaster agency confirmed 29 deaths and said at least 13 more people were missing after days of pounding storms on the island of Sumatra, Agence France-Presse reported.

Two people died from flooding in parts of the capital Jakarta last week and more than 2,000 were displaced, The Associated Press reported.

More than 12,000 others have been evacuated from waterlogged Bengkulu province with hundreds of buildings, bridges and roads damaged.

Hardest hit was Bengkulu Tengah district, just outside of the provincial capital, where 22 people were killed along with hundreds of livestock.

Authorities have set up temporary shelters and public kitchens for the evacuees.

The disaster has damaged transport infrastructure and cut off electricity which has hampered communication and distribution of aids to affected areas, said Sutopo Purwo Nugroho, spokesman of the national disaster management agency, Xinhua reported.

"It is difficult to reach affected-areas as all the roads to the impacted areas are totally cut off. Distribution of aids is hampered," Sutopo said.

"The people are urged to keep on alert as the rains with high intensity are potential to pour down in Indonesia," he said.

Meanwhile, a landslide triggered by heavy rain in Sumatra's Lampung province on Saturday killed a family of six and disrupted transportation links to neighboring regions.

Flooding in parts of the capital Jakarta during the week killed at least two people and forced more than 2,000 to evacuate their homes.

Residents of Bogor, a satellite city of Jakarta, also had to contend with 14 pythons that were set loose from a private property due to the high waters.

Six of the snakes - which were as long as four meters - have been found, but the remaining eight remain on the loose, officials said at the weekend.

In Sumatra, authorities said that illegal coal mining was partly to blame for deadly landslides as the practice makes loose soil susceptible to slides when heavy rains hit.

"Apart from natural factors like the heavy rain, (the flooding) was also caused by human activity that destroys the environment," disaster agency head Doni Monardo told reporters in Bengkulu on Monday.