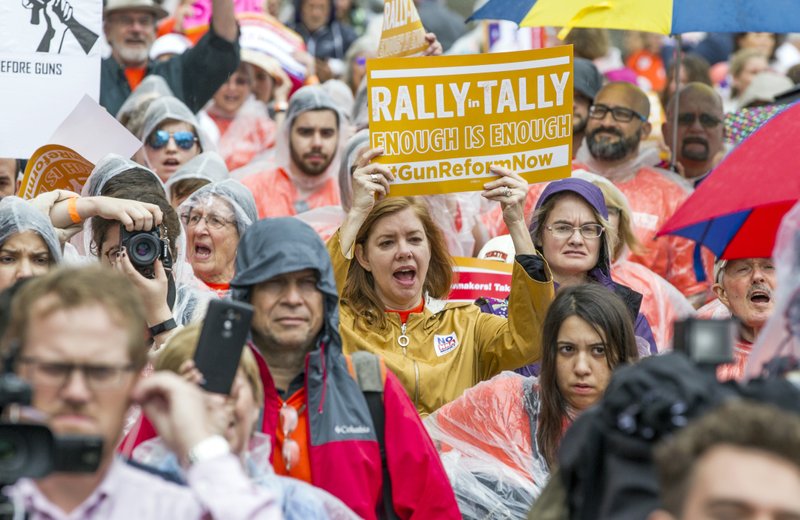 Nearly two weeks after a shooting at a high school killed 17 people, the Florida Legislature took a step closer Tuesday to passing a bill that would allow for armed teachers and raise the age limit to buy rifles, among other changes.

A House committee approved the bill that would raise the minimum age to buy rifles from 18 to 21 and creates a three-day waiting period for all gun purchase. The bill would also create a program that allows teachers who receive law enforcement training and are deputized by the local sheriff’s office to carry concealed weapons in the classroom if also approved by the school district.

The 23-6 vote Tuesday followed more than four hours of emotional discussion, including from parents of some of the 17 killed at Marjory Stoneman Douglas High School on Valentine’s Day.

Democratic Rep. Jared Moskowitz, a former Parkland vice mayor, said he didn’t like the bill, but still voted for it. He explained, “It doesn’t go far enough, and now it goes too far in other areas. But the NRA opposes it and I will not vote with the NRA.”

President Donald Trump says he doesn’t want all teachers to carry guns - just those who have a “natural talent.” (Feb. 26)

“While the proposed bill does not meet all of my goals, the components of the bill would have saved my little boy Alex,” he said. “And if we would have had these measures in place, I would not have had to bury my son next to his mother a week and a half ago.”

Unlike Monday, when hundreds of sometimes rowdy protesters jammed a Senate meeting to consider a similar bill, Tuesday’s proceedings were more orderly. But still, several speakers spoke in favor of the assault weapons ban, including Parkland resident Amber Hersh.

“Our children lost a friend. Our friend lost a daughter. This is your opportunity. The world is watching,” she told the committee.

An amendment to ban assault weapons was rejected on an 18-11 vote.

A Senate committee was going to take up a similar bill later in the day.

As the bill moves through the Legislature, the court case of Nikolas Cruz, the 19-year-old accused of killing 17 people at Marjory Stoneman Douglas High School in Parkland, is underway.

A judge has refused to step aside from the case as requested by his lawyers. Court records show Broward County Circuit Judge Elizabeth Scherer denied the request Monday.

Cruz’s lawyers claimed Scherer has made rulings and comments that indicate favoritism for prosecutors. They said in court papers that Cruz can’t get a fair trial, but Scherer disagreed.

Cruz is charged with 17 counts of murder in the Valentine’s Day shooting.

A Tuesday morning hearing in the criminal case against Cruz was canceled after lawyers reached an agreement for prosecutors to get hair samples, fingerprints, DNA and photographs of him.

Students are scheduled to return to school Wednesday, for the first time since the Feb. 14 shooting.

In Mississippi, lawmakers proposed letting teachers and other school employees with special training carry guns onto campus. The Senate Judiciary A Committee on Tuesday amended House Bill 1083, allowing public and private school administrators to establish school safety programs that would allow teachers to carry guns. School employees would have to receive 12 hours of training every two years from the Mississippi Department of Public Safety.

Meanwhile, Broward Schools Superintendent Robert Runcie told the Sun Sentinel that the district’s hands were tied by federal law after Cruz turned 18 and refused to let the school system continue providing him with crucial mental health and other services.

“You can’t make someone do something when the law says they have the right to make that determination,” Runcie told the newspaper.

Cruz was transferred to a school with programs for emotionally and disabled students when he was in eighth grade but wanted to be mainstreamed back into his home school, Runcie said.

“He often perseverates on the idea that his current school is for students that are ‘not smart’ and that he can now handle being in ‘regular’ school,” according to a Broward school system report from June 2015, the end of his ninth-grade year.

Starting in January 2016, Cruz was allowed to spend half his day at the alternative school and half at Stoneman Douglas to ease him into the less-structured environment.

In August 2016, he started back to Stoneman Douglas, but “the situation had deteriorated” by November, Runcie said. That’s when Cruz, who had turned 18 in September 2016, refused the mental health services offered by the school. Runcie said Cruz had the support of his mother.

He remained at the school until February 2017, when school officials finally decided to remove him after unspecified behavior issues. He was told his only option was an alternative school.

Runcie said he would like to see the aged raised to 21 for students to be allowed to refuse such services.

“The Legislature has just proposed raising the legal age by which you could purchase firearms to 21. Maybe 21 should also be the age they can refuse services,” he told the newspaper.