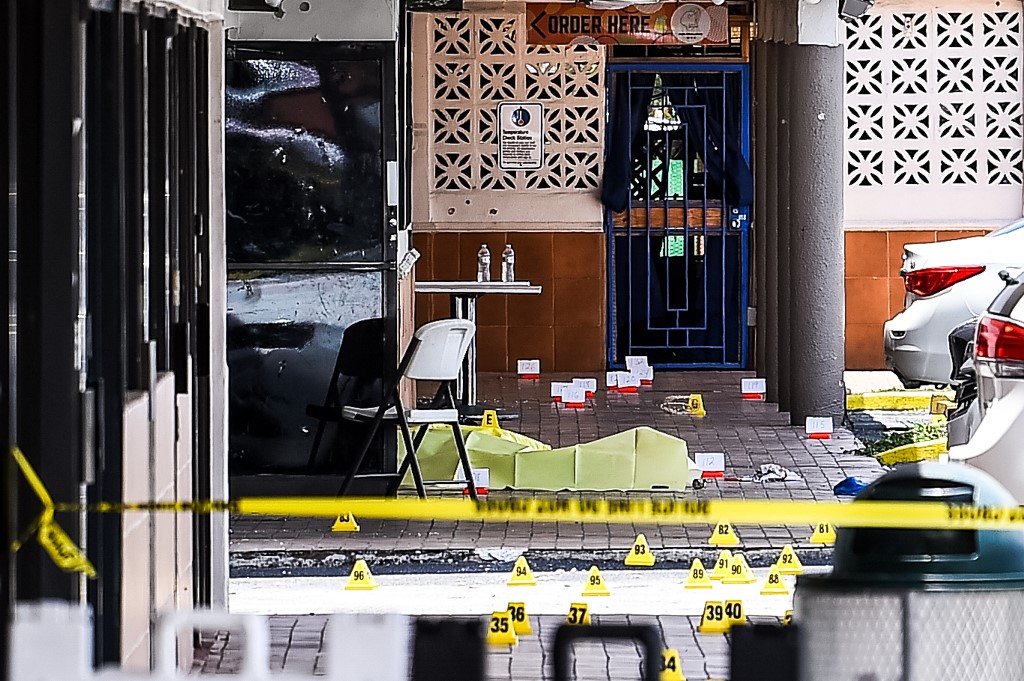 A dead body is seen in front of Billiard's club that was rented for a concert, after three gunmen killed two people and injured 20 overnight in the Hialeah area of Miami Dade county on May 30 2021. (Photo: AFP)

Two people were killed and at least 20 wounded early Sunday when three shooters fired indiscriminately into a crowd outside a concert in the Miami area, police said, the latest shooting in a year that has seen a surge in both gun sales and gun violence.

The shots erupted near a banquet and events hall in a strip mall in Miami Gardens, a heavily Cuban community of working-class families.

Angelica Green told reporters at the scene that her son and nephew, both 24, were among those wounded in the shooting in the wee hours of Sunday. Both were in hospital recovering, though the nephew, hit four times, was in more serious condition.

She had spoken to her son, who was "frantic" when he called right after the shooting. "They say that some guys came out with hoodies and ski masks and just started spraying at the crowd," she said, adding that it was "very scary."

The venue was "hosting a scheduled event and several patrons were standing outside," Miami-Dade Police Department said in a statement.

When a Nissan Pathfinder SUV approached the scene, police added, "three subjects exited the vehicle and began shooting indiscriminately into the crowd."

The trio fled. Their motive was unknown.

On Sunday, about a dozen small yellow cones could be seen on the street outside the hall, marking where bullet casings and evidence were found.

In addition to the two people killed at the scene, at least 20 people were hospitalized, one in critical condition, police said.

In a tweet, the department's director, Alfredo Ramirez III, condemned the "cowardly act of gun violence."

"These are cold-blooded murderers that shot indiscriminately into a crowd, and we will seek justice," he said.

Police were seeking help from the community in finding the shooters.

Chad Harris's 19-year-old daughter was among those wounded.

"My daughter ended up getting shot in the middle of this," Harris said, according to CBS News. "Words cannot express how I feel right now. It's a sad moment."

Florida remains marked by the 2016 shooting at the Pulse nightclub in Orlando, in which a gunman killed 49 people, many of them young Cuban-Americans.

Over the past year, gun-related homicides have surged nationwide.

On Wednesday, a public transit worker shot dead nine people at a California rail yard before turning his gun on himself.

A search this week of the shooter's home -- which was set ablaze shortly before the attack -- turned up 12 guns, some 22,000 rounds of ammunition and suspected Molotov cocktails.

In March last year, the number of weekly federal background checks on gun buyers surpassed one million for the first time, The New York Times reported. Then, this spring, the number hit 1.2 million one week, with many sales going to first-time owners.

The United States has a long, painful history of gun violence -- a problem President Joe Biden has branded an "epidemic."

There were more than 43,000 gun-related deaths in the country last year, according to the Gun Violence Archive.

"If we don't fully mobilize as a society against it," he said on Twitter, "it will get worse before it gets better."