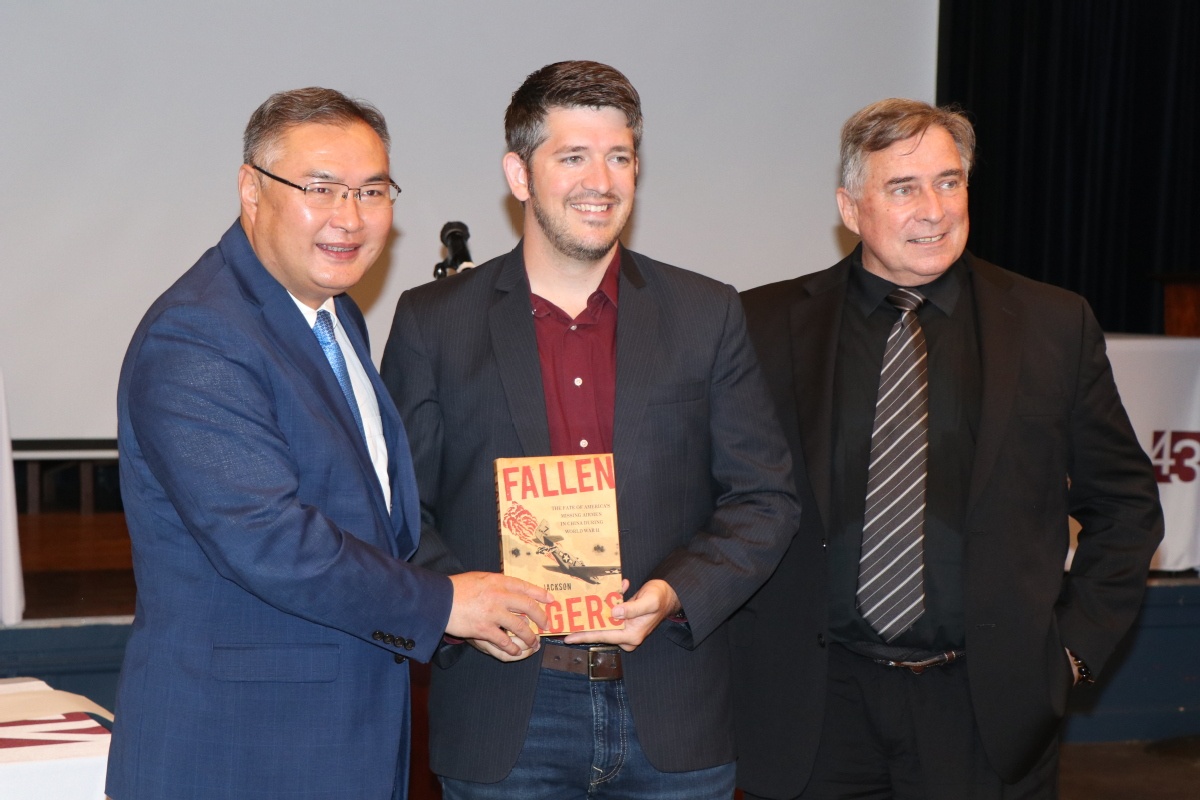 Reflecting on US-China cooperation that took place during World War II shows what is possible in the bilateral relationship, said guests at a press conference announcing the publication of a new book about the Flying Tigers pilots.

China's Consul General in Los Angeles Zhang Ping said he was fascinated by the "vivid and emotional accounts" from Flying Tigers families and surviving Doolittle raiders about how the Chinese army and people rescued them after crash-landing. Many Chinese people died in rescuing and protecting the fallen American airmen, he added.

"The history of Chinese and American people fighting together against Japanese aggression has constituted an important part of the history of China-US relations. It helped to foster a profound friendship between the two peoples and left us with an important legacy of China-US cooperation and friendship that we need to carry forward in our present-day relationship," Zhang said.

The First American Volunteer Groups, nicknamed the Flying Tigers, was a group of fighter pilots commanded by General Claire Chennault, who fought alongside the Chinese army and people against the Japanese invasion during World War II.

Members of the Flying Tigers were made up of pilots from the US Army Air Corps, Navy and Marine Corps who resigned their military commissions under an executive order from President Franklin Roosevelt to join the war effort in China.

The Flying Tigers stories are well cherished and remembered in China, where monuments, heritage parks and museums have been erected to commemorate the fighter squadrons. However, their tales are less known in the US, where people are more familiar with Normandy landings and other operations on the Western front.

This is why Daniel Jackson, a US Air Force pilot and author of the book Fallen Tigers-The Fate of America's Missing Airmen in China during World War II, felt the need to shed light on the Flying Tigers, some of whom had mentored him for his own Air Force career, he said.

"It's really important to tell their stories … because it's just eclipsed by some of the other areas in the war that kind of captured our imagination," said Jackson.

In his book, which draws on interviews from veterans and survivors of the war in the US and China, Jackson recounts the Sino-American cooperation during World War II and how some of the downed American airmen were able to get back to Allied lines with the help of the Chinese.

"What became evident as I went through this research was that this happened across all lines; it didn't matter if you fell into Communist territory, Nationalist territory or collaborative territory. It didn't matter. Those people will work to pick you up from behind enemy lines," he said.

He recalled the story of Doolittle's Raiders, who crash-landed in China after running out of fuel following air raids on Japan. The Japanese slaughtered an estimated 250,000 Chinese in retaliation for aiding the American flyers.

"Most of the stories in this book, most of the men that were rescued, over 800, were rescued after that. The Chinese knew the cost, but they did it anyway," Jackson said.

His research found 680 American airplanes and more than 1,800 American airmen were reported missing in combat missions in China at some point. More than 42 percent of the downed pilots were rescued by the Chinese, he said.

Another chart Jackson displayed during the event showed that out of the 1,756 Flying Tigers in China, 726 were rescued, 82 were taken prisoner, 546 were killed and 402 were reported missing.

Through his research, he hopes to help "bring home some of these men who sacrificed for both the US and China during the war", which he will attempt by combining his findings with local Chinese records, he said.

Jackson recalled going to China and interviewing survivors of the war. One Chinese man he spoke with, who is now in his 90s, was standing on his porch when an American P-40 aircraft was shot down and fell into a river. Without a second thought, the man jumped into the river and pulled the pilot out.

"This project is not just about the Americans' side to this story. It's about the relationship between these two peoples during this war, during this incredibly horrific time in human history, these two very different peoples coming together for the common cause, so it's very important to me to have both sides of that story represented in the book," Jackson said.

The relationship between the two countries has gone through a lot of ups and downs since the days of the Flying Tigers, he said, but the memory of Chinese and Americans working together during the World War II has remained.

"I think that there are a lot of lessons, that people who are different in a lot of ways could come together for common causes. We did it then, and we can do it now," he said.