WORLD FM: Let Syria decide on its own future

FM: Let Syria decide on its own future 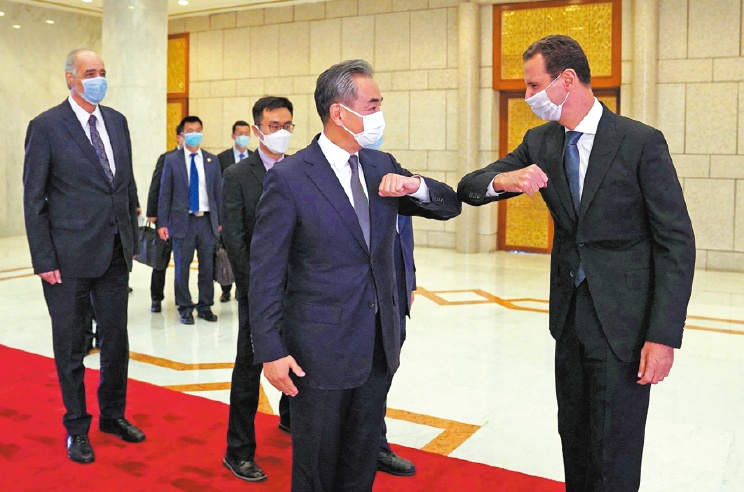 In a bid to help end turmoil in war-torn Syria, Beijing has urged outside countries to stop seeking another power transition there, scrap unilateral sanctions, endorse the country's fight against terrorism and help it fix its internal political rifts.

The four proposals were made by State Councilor and Foreign Minister Wang Yi during his visit to Syria over the weekend. Wang is paying official visits to Syria, Egypt and Algeria from Saturday to Tuesday.

On Saturday, he elaborated on the proposals, which represent Beijing's latest position on helping find a political solution on the Syria issue, during meetings with Syrian President Bashar al-Assad and Foreign Minister Faisal Mekdad.

Wang is the first foreign dignitary received by Assad since he won his fourth term as president in May.

Countries should respect Syria's sovereignty and territorial integrity and the choice of the Syrian people, abandon the illusion of regime change and let the Syrian people independently decide the future and destiny of the country, Wang said.

Sanctions imposed on Syria by some Western countries, such as the United States, have drawn widespread criticism as the sanctions are believed to have undermined reconstruction efforts and aggravated the humanitarian crisis.

Zhang Jun, China's permanent representative to the United Nations, noted at a meeting of the UN Security Council on July 9 that "the international community has a broad consensus" on the impact of unilateral sanctions on Syria's humanitarian situation, and UN Secretary-General Antonio Guterres has called for the measures to be lifted.

Wang said the fundamental fix to the humanitarian crisis in Syria is to "immediately lift all unilateral sanctions and economic blockades against Syria".

On fighting terrorism in Syria, Wang said countries should crack down on all terrorist organizations listed by the UN Security Council and not adopt double standards in this regard.

He stressed the need to respect the Syrian government's achievements and the leading role it has played in fighting terrorism, while warning against manipulation that seeks separatism in the country under the pretext of counterterrorism.

Syria is committed to deepening its friendly cooperation with China and supports China unconditionally on issues related to Taiwan, Xinjiang and Hong Kong, Assad said.

The Belt and Road Initiative and the battle against COVID-19 marked other major highlights of Wang's Syria trip.

On bilateral cooperation, Wang said China will continue offering strong support to Syria in its COVID-19 fight by providing vaccines and other medical supplies, and it will support the country speeding up its reconstruction.

Assad expressed Syria's readiness to take part in co-building the Belt and Road, strengthening cooperation with China in the fields of the economy, science, culture and education and joining hands in the fight against terrorism.

On Saturday, Wang also attended a ceremony with Mekdad for signing cooperative agreements.

During their talks, Wang said China "stands firmly on the side of the Syrian people and on the side of international justice" in terms of the major, principled issue of safeguarding national sovereignty and independence.

Mekdad endorsed China as an important and close friend of Syria, and said Syria is ready to sign a deal with China on co-building the Belt and Road.

He expressed heartfelt gratitude to China for providing Syria with timely assistance at its toughest moments to preserve its national sovereignty and integrity.