WORLD For many US Democrats desperate to beat Trump, Biden's their man

For many US Democrats desperate to beat Trump, Biden's their man 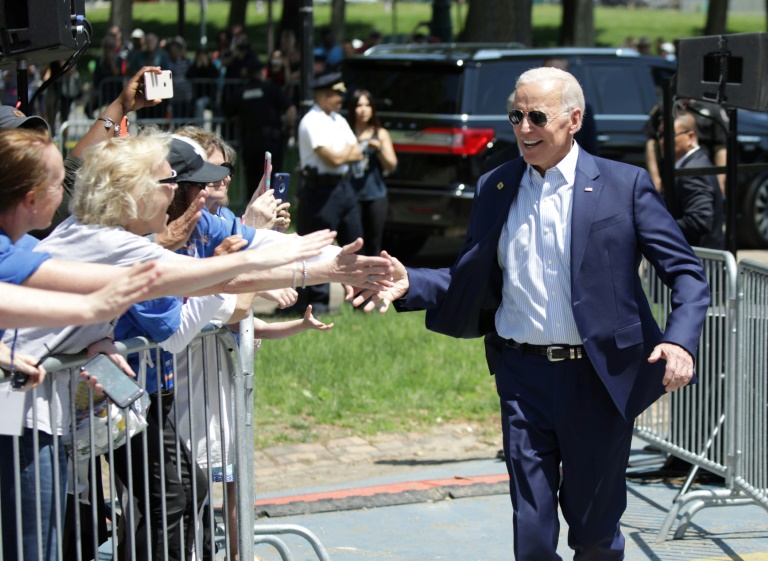 Former US vice president Joe Biden, a veteran Democrat who spent 36 year in the US Senate, boasts the thickest resume of any candidate seeking to deny Trump a second term. (Photo: AFP)

"He could lead the nation and bring us back together," Haley, who is black, told AFP of the 76-year-old former vice president, reflecting what appears to be a solidifying sentiment amid voters whose support has given Biden a commanding poll lead.

Haley, a 60-year-old health care professional, was in the crowd Saturday when Biden came to Philadelphia, Pennsylvania to address the biggest, most boisterous rally of his four-week-old White House campaign.

Many attendees thrilled at Biden essentially sidestepping discussion of the gruelling primary battle ahead and focusing on the general election face-off with Republican Trump, whom he often attacked with explicit condemnation.

"Biden is Trump's biggest rival and has the highest chance of kicking Trump out of office," high-schooler Ankita Kalasabail, who is 16 but will be old enough to vote in 2020, said in explaining her support for a man 60 years her senior.

"We need to beat Trump" and Biden has a stronger shot than the 22 other Democratic candidates, said Mickey Kirzecky, a consultant.

Biden, a veteran Democrat who spent 36 year in the US Senate, boasts the thickest resume of any candidate seeking to deny Trump a second term.

But crucially, said Kirzecky, he has a knack for connecting with all-important blue-collar voters.

"I hate to use the word electability, but I think that's part of what comes into play," she added, stressing Biden's more moderate politics and his popularity with working-class Americans -- a constituency that helped Trump win the White House in 2016.

"I think he might be a healing candidate," she added.

The historically diverse race is cluttered with progressives vying for the votes of Democrats witnessing their party's steady leftward shift.

But Haley, the health professional, said her candidate criteria are based not on skin-color, age, or gender, but capacity to win and to get the job done.

As for Biden being one of three septuagenarians in the race, along with Trump and Senator Bernie Sanders, Norda Lewis brushed it aside.

"I don't think that age matters," said the 36-year-old teacher from the Philadelphia suburbs, describing Biden as "a man for the people" who can appeal to traditional Democrats, independents, and working-class Republicans.

John Lester, a graphic designer from Philadelphia, said Biden's age could become a concern, although "he does seem like a healthy guy."

What draws him to Biden is the candidate's "broader appeal" and moderate politics, Lester, 61, said.

"I support the issues of diversity," but moving too quickly toward a liberal agenda at a time of deep political divisions might backfire, he added.

"I like that fact that he's steady and I trust him," added Lester's wife Doreen. "I believe that he's a good guy, and I think we need good again."

Biden spent eight years in the White House with president Barack Obama, and his close alliance with the nation's first black commander in chief has earned him strong support from the coveted African-American voting bloc.

But Biden's legislative record and past actions, such as his treatment of Anita Hill -- the woman at the center of emblematic sex harassment hearings in the Senate almost three decades ago -- or his support for a crime bill that led to mass incarcerations of black men, have come under scrutiny.

His tactile campaign style that has led women to accuse him of making them uncomfortable also bolsters the notion of Biden as a politician slightly behind the national current.

"I think that his time has passed," Laura Benedetto, who works for an education non-profit, said Friday at a Virginia campaign event featuring liberal candidate Elizabeth Warren.

Biden's campaign pushes back against the argument that he is a political relic, or that he might lack the energy to mount an 18-month campaign.

"Vice president Biden is up to the challenge. He wouldn't have gotten into this race if he wasn't," senior advisor Symone Sanders told AFP.

"We're up right now," she said of the favorable polls, "but we are running this race as if we're the underdog."