WORLD For Muslims, feasts make way for Ramadan in lockdown

For Muslims, feasts make way for Ramadan in lockdown 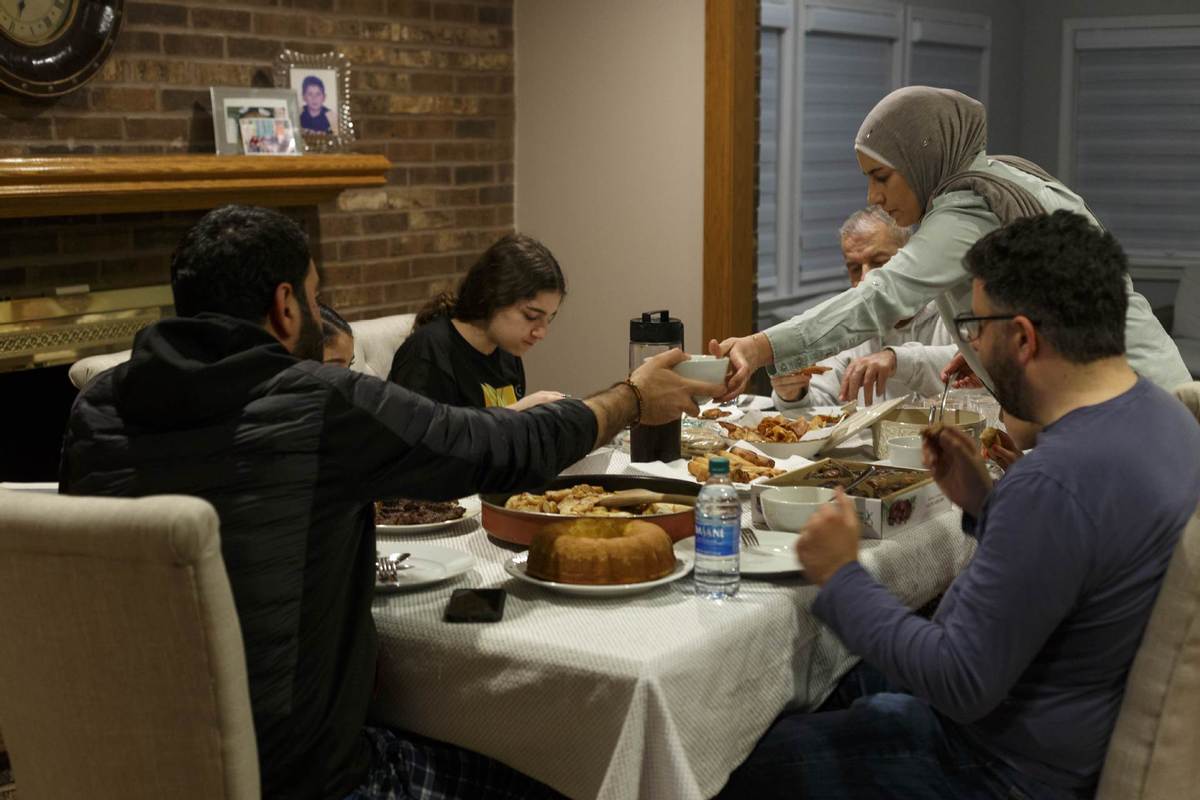 A family shares a meal and breaks fast with their family on the first full day of Ramadan on April 24, 2020 in Dearborn, Michigan. Due to the social distancing guidelines being enforced to combat the spread of the COVID-19 the Muslim holy month of Ramadan is going to be observed differently this year amidst the pandemic. (Photo: Agencies)

Muslims around the world began marking Ramadan under coronavirus lockdown on Friday with unprecedented bans on family gatherings and mass prayers.

This year, the holy daytime fasting month will be a somber affair for many across Asia, the Middle East and North Africa.

Widespread rules have been imposed banning praying in mosques or meeting relatives for large "iftar" meals at dusk－a centerpiece of the monthlong fast.

The restrictions have put a damper on spirits in Indonesia, the world's biggest Muslim majority nation, where national religious organizations have called on the faithful to stay at home.

"I'm disappointed that I can't go to the mosque, but what can we do? The world is different now."

The World Health Organization has called for a stop to some Ramadan activities to limit exposure.

Jakarta resident Erik Febrian said he was relying on a computer to allow him to keep in touch with his out-of-town parents until he can see them in person at the end of Ramadan.

"Thanks to technology I can video-call my parents every day during Ramadan," he said. "And keep an eye on their health."

Meanwhile in Japan, at least 91 crew members on board a cruise ship docked in Nagasaki have the virus, officials said, after 43 more workers were added to a tally of those testing positive.

The Italy-flagged Costa Atlantica has no passengers aboard and arrived in the southern Japanese port for repairs in January.

Test results from all 623 crew members on board should be available by early on Saturday, said Katsumi Nakata, head of the regional government's health and welfare department.

"We think we will have a clearer picture once we get all the samples," Nakata told reporters.

Some crew have been isolated in cabins but many also have to move around to maintain basic functions, the ship's operator has told Japanese officials.

All crew members are from outside Japan, except for a translator. Local officials are working with the national government to allow those who test negative to go home, while also attempting to arrange for the ship to leave the region if it is safe to do so.

"Considering the limited medical resources we have in this region, it is difficult for us to maintain and control the health of all the 630 people," Nakata said.

"We need to maintain the medical system for local residents."

So far, one crew member has been hospitalized and is on a ventilator, while others with relatively mild symptoms have remained on the ship.

Japanese officials are still investigating how the outbreak started on the ship. The case has puzzled authorities because the southern port city has a relatively low number of infections and the vessel has been docked since the end of January.

In Tokyo, Health Minister Katsunobu Kato said the central government and Italy were to discuss ways to arrange the repatriation of healthy crew members, as well as the earliest possible departure of two other Italian cruise ships, Costa Cerena and Costa Neo Romantica, also docked in Nagasaki.

Japan has already dealt with one virus outbreak on a cruise ship－the Diamond Princess, which docked in Yokohama after a former passenger tested positive for the disease. Authorities ordered an on-ship quarantine, but more than 700 people ultimately contracted the virus, and 13 died.