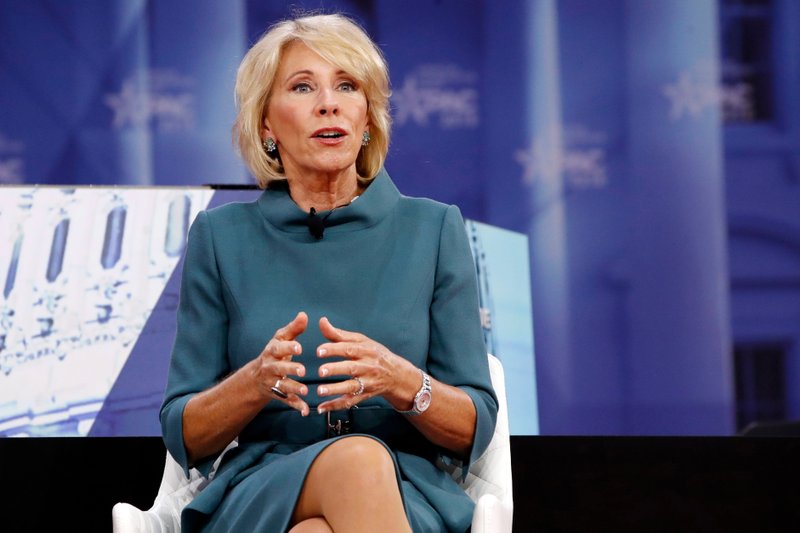 The for-profit college industry is struggling under the weight of declining enrollment, stiff competition from traditional universities and an image battered by past misdeeds, even as the Trump administration tries to offer a helping hand.

Education Secretary Betsy DeVos has hired several industry insiders and frozen Obama-era regulations that would have increased protections for students. She has reduced loan forgiveness relief for some former students defrauded by their schools, meaning that the for-profit industry could be on the hook for less. And she is considering reinstating an ousted oversight agency for many for-profit colleges.

“There is a serious attempt by this department to find that appropriate fair balance for both students and schools,” Steve Gunderson, president of Career Education Colleges and Universities, the industry lobbying group, said in an interview.

But Timothy Lutts, president of the Cabot Wealth Network in Salem, Massachusetts, sees an industry in decline. An improving economy has led to lagging enrollment as adult students return to the workplace instead of seeking a degree to burnish their resumes, he said. For-profit colleges now also compete with nonprofit schools that offer online degree programs without the stigma that still haunts money-making schools.

“It was a great sector a decade ago,” Lutts said. “For for-profit schools, the tide is still going out.”

Student enrollment at most four-year for-profit colleges fell in 2017 to just over 901,000, down nearly 69,000 from the year before, according to data compiled by the National Student Clearinghouse Research Center. It’s a downward trend that began in the fall of 2010.

The falling numbers have led to upheaval.

Adtalem Global Education in December unloaded DeVry University by transferring ownership of the struggling school at no cost to a small for-profit education company in California. The move came a year after DeVry agreed to a $100 million settlement to resolve a Federal Trade Commission lawsuit alleging the school misled students through deceptive ads.

Donald Trump’s election as president had held the promise of heady times for the industry. After all, he was the founder of Trump University.

Among the DeVos hires are senior counselor Robert Eitel, who served as an attorney for Bridgepoint Education; Julian Schmoke, the top financial enforcement official, who once worked as an academic dean at DeVry; and Diane Auer Jones, who was hired as a senior policy adviser this month, used to lobby for Career Education Corporation, a major for-profit operator.

“What we have here is essentially an embrace of that industry by the Trump administration,” said Kathleen Clark, a law professor at Washington University in St. Louis. “If the concern is that a whole industry has been exploiting the situation, you wouldn’t want any one from that industry being involved in any regulation, you would be skeptical.”

Paul Peterson, a professor of education at Harvard University, said DeVos’ hiring decisions were not unusual. Historically, U.S. administrations have tended to fill many positions with people outside the government sector in order to bring new energy and perspective, with Democrats traditionally relying most on lawyers and academics, while Republicans picking industry practitioners.

“You don’t want people running the government who don’t know anything about the sector,” Peterson said.

Education Department press secretary Liz Hill said individuals hired had long careers before and after their work in the for-profit sector. “In addition to being highly qualified, they are carefully complying with all ethical requirements and have recused themselves when appropriate,” Hill said in a statement.

She said DeVos was focused on expanding education options for students and that the schools’ tax status was irrelevant to the quality of their education. “The one question we should be asking is whether or not an education institution is serving students well, not how it filed paperwork with the IRS,” Hill said.

But Erika Colon, a 35-year old mother of three in Boston, said the federal government should increase oversight and tighten controls of for-profit schools. Colon, 35, took out about $15,000 in loans to get a certificate as a medical administrative assistant at one of the Corinthian Colleges schools. She said she received a low-quality education, could not get a job and ended up retraining in a related field at a different school — only then getting hired by a hospital.

“They are just giving students high hopes for nothing and just taking people’s money,” Colon said.

For-profits had experienced a boom over the past two decades, buoyed by federal student funding and the global financial crisis that left many Americans without jobs and eager to go back to school to gain new skills and credentials. Enrollment rose from around 230,000 in the early 1990s to a record 2 million in 2010.

The schools recruited aggressively, often targeting nontraditional students — usually older people who had jobs and could only study part time. Schools focused heavily on women and people of color. They also pursued veterans with their millions in GI Bill tuition assistance. A 2017 federal study found that veterans represent a larger share of students at for-profit colleges compared with other schools.

But after graduating, many students struggled to find promised jobs or to transfer credits to other schools, leading to massive student loan defaults. An Education Department watchdog said in a report last month that the “sector continues to present itself as a high-risk area for the department.”

With the future uncertain, a growing number of schools are seeking to abandon the for-profit world by converting to nonprofit status. These transformations, which require approvals from state and federal regulators, mean less oversight and relief from a law that bars for-profits from receiving more than 90 percent of their revenue through federal student aid programs.

After five straight years of losing revenue and students, Bridgepoint Education, the San Diego-based owner of two for-profit universities, announced last month that it intends to merge its schools into a single nonprofit called Ashford University. Bridgepoint will become what’s known as an online program management company. These are the businesses that design, market and run the virtual programs that colleges offer to students. Pending the necessary approvals, Bridgepoint’s first client would be Ashford University.

Nolan Sundrud, a Bridgepoint spokesman, attributed the overhaul to the rapidly evolving environment in which colleges and universities operate.

Consumers should be wary of these proposed conversions, according to Bob Shireman, a former Education Department official during President Barack Obama’s first term and a frequent critic of for-profit colleges. Shireman, a senior fellow at the Century Foundation, a progressive Washington think tank, published a report in 2015 that warned of “covert nonprofits” that are free of regulatory burdens but continue to operate as for-profit schools.

A group of Democratic senators has asked the Government Accountability Office to look into the conversions.