WORLD For water-stressed Iraq, wells threaten race to the bottom

For water-stressed Iraq, wells threaten race to the bottom

Iraq has long drilled the desert for oil, but now climate stress, drought and reduced river flows are forcing it to dig ever deeper for a more precious resource: water. 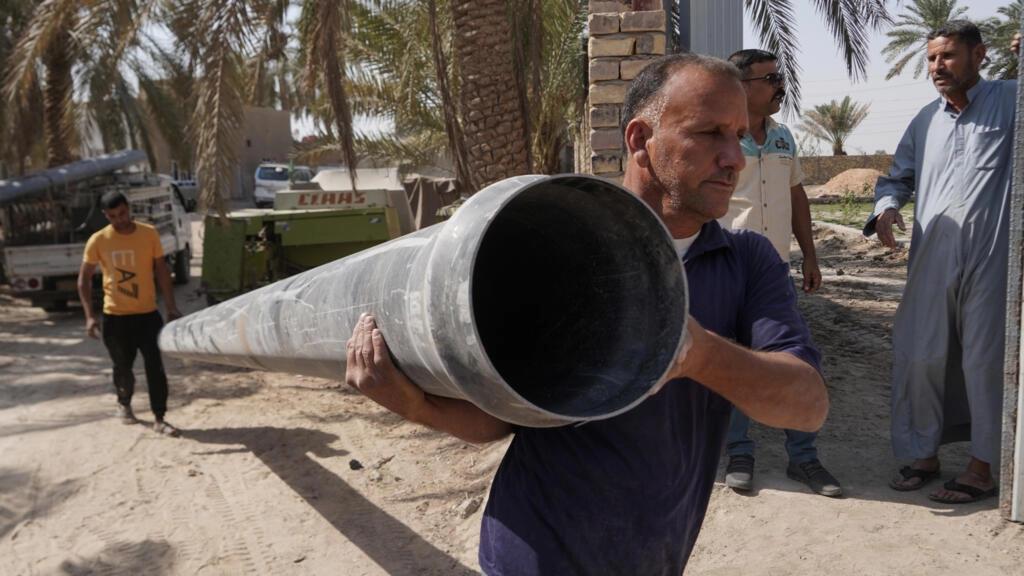 Iraqis have drilled hundreds of new wells at ever greater depth as the groundwater table below keeps dropping. (Photo: AP)

The war-scarred nation and major crude exporter is one of the world's five countries most impacted by key effects of the climate crisis, says the United Nations.

Compounding the water stress, upstream dams, mainly in Turkey, have vastly reduced the flow of the Tigris and Euphrates, the once mighty rivers that gave birth to Mesopotamian civilisation.

One of Iraq's millions of hardscrabble farmers bearing the brunt of this ecological crisis is Jabar al-Fatlawi, 50, a father of five with a rough beard and wearing a white robe.

Like his father before him, he has grown wheat and rice in the southern province of Najaf -- but not this year, he said, blaming the "severe water shortage".

To help him keep alive at least his date palms and livestock, he has paid local authorities to dig a well on his dusty patch of land near the town of Al-Mishkhab.

Fatlawi watched as a noisy drill churned up the ground and eventually hit the water table far below, sending up a jet of muddy water that will allow him to battle on, for now.

As Iraq endures its worst drought since 1930, and frequent sandstorms turn the sky orange, he hopes the precious water will allow him to at least grow dill, onions and radishes.

His well is one of hundreds recently drilled in Iraq -- at ever greater depth as the groundwater table below keeps dropping.

Fatlawi said he had once dug his own, small-scale well, before the government declared it illegal.

At any rate, he recalled, "sometimes the water was bitter, sometimes it was salty".

The short-term solution for farmers like Fatlawi exacerbates a long-term problem as frantic competition heats up for ever more scarce water, experts warn.

Another southern farmer, Hussein Badiwi, 60, said he had been planting barley and grass for livestock on the edge of the Najaf desert for 10 years.

Like his neighbours, he relies exclusively on water drilling and said the area had seen "a drop in the water level because of the multitude of wells".

Iraq, a country of 42 million, is seeing a race to the bottom for the precious groundwater.

The Sawa Lake in the south, a pilgrimage site, this year vanished for the first time in recorded history as some 1,000 illegal wells had sucked away the water table below.

In a country where one in five people work in agriculture, water shortages have destroyed livelihoods and driven a rural exodus into crowded cities, heightening social tensions.

Anger has flared at a government seen as incompetent and corrupt, and sporadic protests have broken out in the south demanding Baghdad pressure Turkey to release more water from its dams.

Iraq's ministry of water resources warned during the blistering summer that "excessive groundwater use has led to many problems" and called for "the preservation of this wealth".

To tackle the crisis, authorities have shuttered hundreds of illegal wells.

But they have also drilled some 500 new ones in this year's first half, with plans for more in at least six provinces ahead of what the ministry predicts will be "another year of drought" in 2023.

Najaf's head of water resources, Jamil al-Assadi, said fees to drill wells had been reduced by half, and many new ones had been sunk into areas formerly irrigated by rivers and canals.

The water is intended for "livestock, irrigating orchards and limited plantations", but insufficient and too salty for wheat fields or rice paddies, he said.

In exchange, "the farmers must use modern irrigation methods" rather than the wasteful flooding of fields they have practised since ancient times.

A United Nations agency has welcomed Iraq's new regulations, but also suggested water meters on wells and "a pricing system to limit groundwater use".

On a national level, Iraq provides "no incentives to encourage the use of modern irrigation technologies," said the UN Economic and Social Commission for Western Asia.

Another Iraqi wheat and rice farmer, Salah al-Faraon, complained that the authorities had limited the land he could cultivate "because there is not enough water".

"Without rice and wheat, how can we live without income?" asked the 75-year-old. "We can migrate, but to where? The whole country is being stolen."