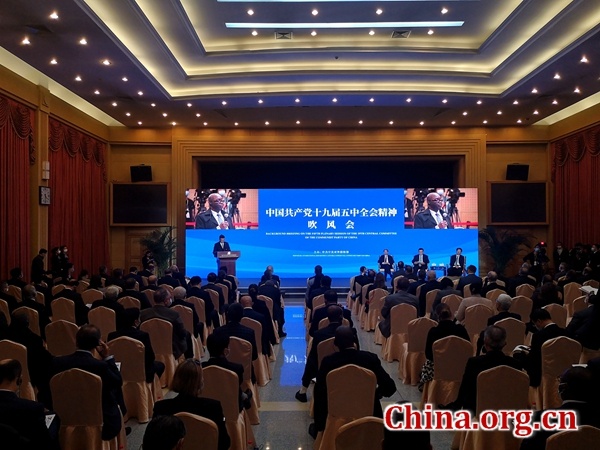 A background briefing on the fifth plenary session of the 19th CPC Central Committee is held in Beijing on Nov. 9, 2020. [Photo by Wang Yiming/China.org.cn]

Senior diplomats from over 100 countries, including more than 60 ambassadors, attended the briefing.

Song Tao, head of the IDCPC; Yin Yanlin, vice minister of the General Office of the Central Financial and Economic Affairs Commission; Xin Xiangyang, deputy director of the Institute of Marxism at the Chinese Academy of Social Sciences; and Wang Changlin, president of the Academy of Macroeconomic Research at the National Development and Reform Commission, addressed the attendees and fielded questions.

The speakers introduced China's achievements during the 13th Five-Year Plan period (2016-2020), the drafting process of proposals for formulating the 14th Five-Year Plan (2021-2025) for National Economic and Social Development and the Long-Range Objectives Through the Year 2035, as well as important concepts and strategies including the new development patterns proposed during this key session.

Song stated that the fifth plenary session has not only given a strong impetus for China's development, but will also inject more confidence in the global economic recovery, and provide greater opportunities for the development of all countries.

Foreign diplomats spoke highly of the fifth plenary session, congratulating China on the great achievements made during the 13th Five-Year Plan period. They noted that the proposals adopted at the session fully embody the CPC's people-centered development concept, and have drawn a clear blueprint for China to achieve high-quality development in a new historical stage.

The Zimbabwean chargé d'affaires Mqabuko Spencer Dube said that as China is the world's second largest economy and the first major economy to rebound after the COVID-19 outbreak, its formulation of the 14th Five-Year Plan and the 2035 long-range objectives will have a significant effect on the global economy.

Bakhtiyor Saidov, Uzbek ambassador to China, told reporters after attending the briefing that highlights of the 14th Five-Year Plan include China's emphasis on improving the living standards of the Chinese people and greater openness to the world.

He said that the huge Chinese market will provide important opportunities for all countries, including Uzbekistan, noting that more high-quality Uzbek agricultural products have entered the Chinese market. He added that the two countries will continue to develop their mutually beneficial partnership.

Many other diplomats also expressed their willingness to strengthen exchanges with China on experiences of governance, and cooperate in restoring the economic recovery after the COVID-19 pandemic and building a better world.