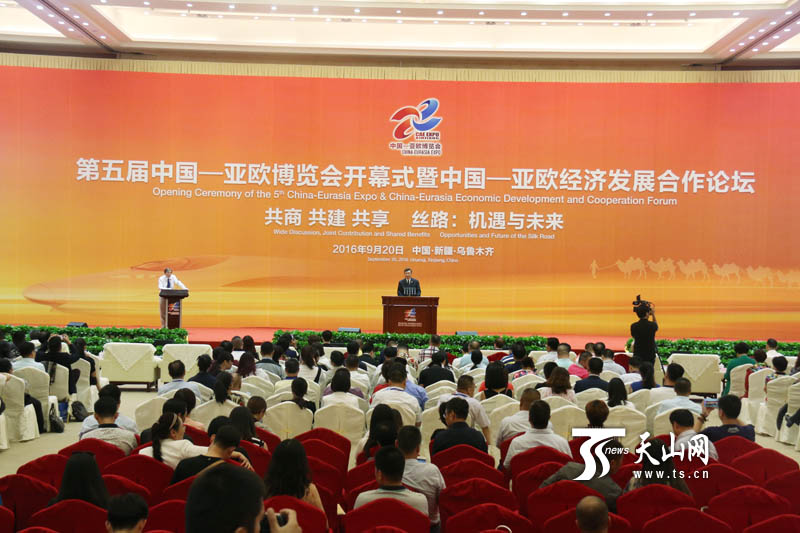 Yagmyrgeldi Durgyyev, an entrepreneur from Turkmenistan, is proud of what he is "selling" in China -- the beautiful scenery of his country. As director of Ashgabatsiyakhat, a tourism company in Turkmenistan, he is confident about his "commodity" at the sixth China-Eurasia Expo that opened Thursday in Urumqi, capital of northwest China's Xinjiang Uygur Autonomous Region. Turkmenistan has many amazing places, especially the "Shining of the Garagum", he said. The tourist destination is a huge crater, 60 meters wide and 20 meters deep, in the middle of the Garagum Desert with 10-meter-high tongues of flame which have burned for more than 40 years. Durgyyev considers the expo a great opportunity to expand into the Chinese market. Most Chinese tourists know little about Turkmenistan's tourism resources, which makes the expo the perfect platform to show them the beauty of our country, he said. Turkmenistan has several beautiful places, and the "Shining of the Garagum" makes me very curious, said Ma Sai, a tourist from central China's Henan Province who attended the expo. "Our company received about 1,500 Chinese tourists a year," said Durgyyev, expecting the number to double in 2018. Previously, Russia was our major market, but we have decided to focus on the Chinese market considering its huge potential, he said. Mohammad Jan Aminzai, president of a carpet company from Afghanistan, is another entrepreneur who has realized the potential of the Chinese market. Attending the expo is not just about promoting our products, he said. He is seeking a Chinese company to cooperate with at the expo, aiming to develop products that are designed for Chinese customers, given that half of his company's products are sold to China. We have made many changes in traditional Afghan carpets, increasing the patterns of the flowers such as lotus on our carpets, he said. Although we are researching Chinese customers' preferences, it is more effective to work with a Chinese company that knows more about what Chinese people like, he added. Unlike Aminzai, Yadigar Israfilov, managing director of a canned food factory in Azerbaijan, believes that originality is a key to finding success in the Chinese market. Our brand of juices and canned food is one of the oldest and best in Azerbaijan, famous for its high quality and no added preservatives, he said. We believe the original Azerbaijani flavor would be a unique attraction for Chinese customers, he added. The expo is a great platform for foreign entrepreneurs to display their products to Chinese customers and seek cooperation with Chinese companies, said Bandara Diss, chairman of the Chamber of Friendship of Sri Lanka and China. Under the theme "The Belt and Road -- Wide Discussion, Joint Contribution and Shared Benefits," the China-Eurasia Expo drew participants from more than 700 domestic and foreign companies.