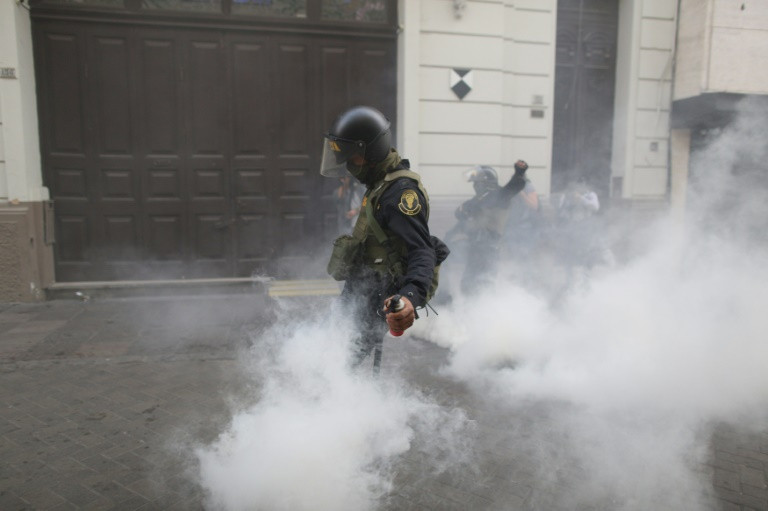 Police sought to prevent the protestors from heading to the clinic where Fujimori is hospitalized on December 26, 2017. Photo: AFP

"I am aware that the results of my government were well received on one side, but I admit that I have let down other compatriots, and I ask them to forgive me with all my heart," Fujimori said in a Facebook video filmed from his hospital bed.

The 79-year-old had been serving a 25-year sentence for corruption and human rights abuses committed during his time in office from 1990 to 2000.

He was transferred from prison to a hospital on Saturday after suffering from low blood pressure and an irregular heartbeat, the latest in a string of hospitalizations.

In the video, Fujimori lay propped up on a hospital bed wearing a white gown, with a blood pressure cuff on his right arm and another monitor clasped to his left index finger. He talked over the constant background beeping of a monitoring device.

Gray-haired and with bags under his eyes, he spoke clearly, looking directly into the camera but also glancing down as if checking a prepared text that was out of the camera's view.

President Pedro Pablo Kuczynski ordered the pardon of Fujimori and seven other prisoners Sunday on humanitarian grounds, placing himself in the middle of a political crisis just days after he avoided impeachment.

The move set off street protests in Lima, and police fired tear gas and clashed with demonstrators who were marching Monday against the pardon and demanding that Kuczynski step down.

The president defended his decision in a televised message to the nation.

"I am convinced that those of us who feel democratic should not allow Alberto Fujimori to die in prison, because justice is not revenge," Kuczynski said in his address Monday night.

"It is about the health and chances of life of a former president of Peru who, having committed excesses and grave errors, was sentenced and has already completed 12 years" in prison, he said.

Anti-riot police deployed to prevent demonstrators from heading to the clinic where Fujimori is hospitalized, firing tear gas canisters and erecting barricades to disperse them.

"Out, out PPK! Out, out PPK!" demonstrators chanted in reference to the current president, who had promised during his electoral campaign last year that he would not free Fujimori.

"Fujimori, murderer and thief. No to the pardon!" read a sign held by the protesters, some of whom also carried a giant Peruvian flag.

elatives of victims of Fujimori's brutal rule took part in the march.

"We are here as relatives to reject this illegal pardon, because it does not correspond to the gravity of the crimes," Gisella Ortiz, from a group of victims' families, told reporters.

The pardon from Kuczynski came after Fujimori's son Kenji drained votes away from a parliamentary bid Thursday to impeach Kuczynski on suspicion of corruption, sparking speculation the pardon was political.

"The president's word is totally devalued and he will not be supported again," political analyst Arturo Maldonado told El Comercio newspaper.

"The circumstances in which he has given the pardon, on a date as symbolic as Christmas, generates a sense of frustration and anger," said Jose Miguel Vivanco of US-based group Human Rights Watch.

Instead of reaffirming that in a state of law there is no special treatment for anyone, the idea that the liberation was a vulgar political negotiation in exchange for keeping Pedro Pablo Kuczynski in power will remain forever."

A doctor at the Centenario Clinic, Alejandro Aguinaga, told reporters that Fujimori's condition was "delicate" and there was no prospect of his leaving soon from the facility where he is in intensive care.

The former leader has spent more than a decade imprisoned for ruthlessly cracking down on political rivals and for ordering dozens of murders and overseeing other brutal tactics.

Despite his conviction for human rights abuses, however, Fujimori retains a level of popularity in Peru for having defeated left-wing guerrillas and for stabilizing the economy after a period of crisis.

That dichotomy has come to the fore with the pardon: dozens of supporters gathered in front of the hospital caring for him, while opponents demonstrated in Lima against him.