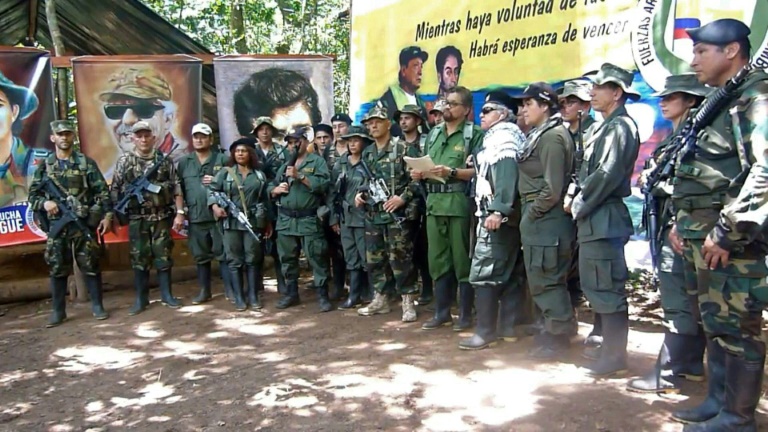 A former senior commander of the dissolved FARC rebel army in Colombia announced Thursday he is taking up arms again along with other guerrillas who have distanced themselves from a historic peace accord signed with the government.

"We are announcing to the world that the second Marquetalia has begun," Ivan Marquez, dressed in green military fatigues, said in a video posted on YouTube, referring to a rural enclave considered a birthplace of the FARC in the 1960s.

Marquez accused the government of betraying the hard fought accord under which most of the FARC's 7,000 fighters had laid down their weapons after half a century of armed conflict.

The whereabouts of Marquez, the Marxist FARC's number two leader and chief negotiator of the 2016 peace agreement, had been unknown for more than a year.

In the 32-minute video, Marquez appears in the Colombian jungle flanked by 17 men and women holding rifles. Behind them is a yellow FARC banner.

Marquez said the government had cheated in the implementation of the accord, unilaterally changed its wording and failed to provide legal guarantees for former fighters, among other offenses.

All this, he said, "forced us to return to the field," Marquez said.

The FARC will coordinate with Colombia's last active rebel group, the National Liberation Army, "and those comrades who have not folded up their flags," he said.

Marquez and a fugitive rebel colleague, Jesus Santrich, have distanced themselves from the 2016 peace agreement.

Marquez disavowed it a year ago, making the same arguments he is now: that the government is not living up to its end of the deal.

Santrich, who went underground earlier this year after the United States sought to have him extradited on drug charges, also appeared in the video.

Although most of the FARC fighters laid down weapons to return to civilian life, around 2,300 distributed in different groups have refused to do so.

These rebels get by mainly through drug trafficking and illegal mining, according to Colombian military intelligence.

There was no immediate government reaction to Marquez's explosive announcement of a return to arms.

With UN support, the peace accord ended the insurrection by the Revolutionary Armed Forces of Colombia and turned it into a political party called the Common Alternative Revolutionary Force, which uses the same FARC acronym.

While it hasn't ended violence in the country -- other left-wing rebels, right-wing paramilitaries and drug traffickers are still waging their battles -- it has helped to reduce it.

Conservative President Ivan Duque was elected last year with a promise to modify the accord, which he considers too lenient on ex-fighters guilty of serious crimes.

The FARC political party, meanwhile, has denounced delays in the application of the accord as well as a lack of legal guarantees and security for its members.

It has pointed to what it says are the murders of 140 former guerrillas, and 31 of their family members, since the agreement was signed.

The new FARC political party that arose from the rebel army under the peace accord said it regretted the announcement from Marquez.

Party president Rodrigo Londono, who used to go by the nom de guerre Timochenko during the war, called it a "low blow."

He said most former FARC soldiers still believe in the peace accord. But there are others who are wavering and they might buy into what Marquez is doing now, Londono said.

"It could hurt us," he said on Colombian radio.

Former president Juan Manuel Santos, who won the Nobel peace prize for bringing about the accord, defended it and insisted most former FARC members still believe in it.

"We must come down hard on deserters. The battle for peace does not stop," Santos tweeted.