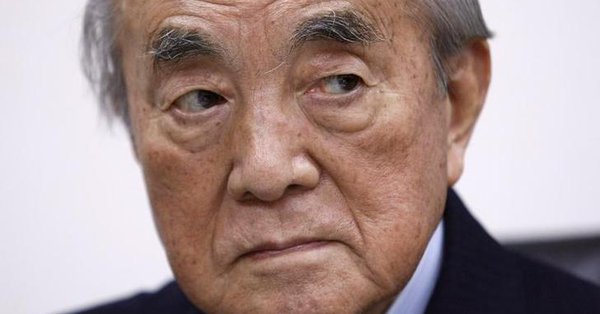 Nakasone, who trod the world stage with Ronald Reagan and Margaret Thatcher during his 1982-1987 tenure, has long advocated amending the US-drafted charter to clarify the ambiguous status of the military - a goal shared by incumbent premier Shinzo Abe.

He urged politicians to seriously tackle the matter, which remains a contentious topic among the Japanese public.

“To resolutely open the path to the nation’s future ... is the essence of politics,” Nakasone said in a statement issued to mark his birthday that was carried by Japanese media.

Known for his “Ron and Yasu” friendship with Reagan, Nakasone made headlines after taking office when he said that, in the event of a war, he would make Japan an unsinkable “aircraft carrier” for US forces and bottle up the Soviet navy.

A former lieutenant in the Imperial Navy who lost his younger brother in World War Two, Nakasone outraged Asian countries when he made an official visit to Tokyo’s Yasukuni shrine, where convicted war criminals are honored along with Japan’s war dead, on the 40th anniversary of Japan’s surrender.

He decided not to repeat the pilgrimage after it sparked riots in China.

Nakasone was forced to retire in 2003 when he was 85, along with other elder statesmen, by then-premier Junichiro Koizumi, who was keen to rejuvenate the Liberal Democratic Party’s image as a party of staid, elderly politicians.

Commenting on the reasons for his longevity, Nakasone cited a disciplined life, interest in nature - and an insatiably inquiring mind.