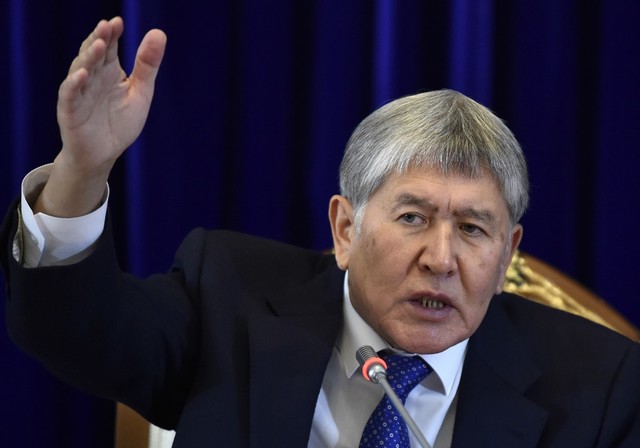 Kyrgyz ex-president Almazbek Atambayev speaks during his last press conference at the Ala Archa state residence in Bishkek on November 20, 2017.  (Photo: AFP)

BISHKEK (Xinhua) -- Former Kyrgyz President Almazbek Atambayev has been captured by the special forces of Kyrgyzstan and brought to the Interior Ministry for investigation, local media reported.

The special forces took away Atambayev from his residence in the village of Koi-Tash near the capital city of Bishkek after Wednesday's failed attempt, which resulted in clashes with the former leader's supporters, leaving one dead and some 52 others injured.

Kyrgyz President Sooronbai Jeenbekov suspended his one-week vacation and went to Bishkek on Wednesday, according to a statement published on the presidential website.

A special commission of the Kyrgyz parliament found that Atambayev, 62, could be involved in six crimes during his presidency from December 2011 to November 2017.

The charges included suspected corruption during the reconstruction of Bishkek's thermal power station, the unlawful obtaining of land for building his residential house, and helping release Chenchen criminal Aziz Batukayev.

The Kyrgyz parliament voted on June 27 to deprive Atambayev of his immunity, paving the way for his detention and trial.

Atambayev called the allegations "absurd" and said that he was innocent and ready to respond to all the accusations.