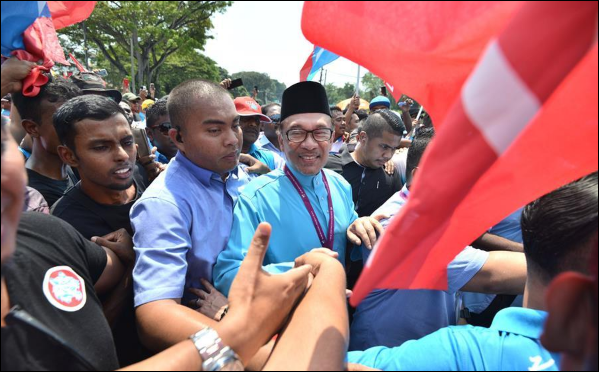 Former Malaysian deputy Prime Minister Anwar Ibrahim is facing a multi-corner fight in a parliamentary seat, following the nomination of the by-election on Saturday.

The 71-year-old Anwar would contest the seat in the lower house of parliament for Port Dickson, a coastal town, as the candidate of his People's Justice Party (PKR) and the ruling coalition of Pakatan Harapan.

Anwar is facing six opponents, among them one from the opposition Pan Malaysian Islamic party (PAS) while the other contest as independent. But he would expect no serious challenge.

The Barisan Nasional coalition, which has governed Malaysia since independence until the general election in May, announced a boycott of the by-election.

One of the independent is Saiful Bukhari, a former aide of Anwar. Saiful accused the then opposition leader Anwar of sodomizing him in 2008, which led to Anwar being jailed in 2015.

Anwar was granted a royal pardon on his sodomy conviction following Pakatan Harapan's victory in May. He has won the presidency of his PKR party unchallenged.

The Pock Dickson seat was vacant following the resignation of the parliamentarian to trigger a by-election to allow Anwar to return to the parliament.

Becoming a member of parliament will pave to way for Anwar to succeed the 93-year-old Mahathir Mohamad to become Malaysia's prime minister, as part of the agreement that led the Pakatan Harapan coalition to a historic victory.

The Election Commission said the by-election would be held on Oct. 13.