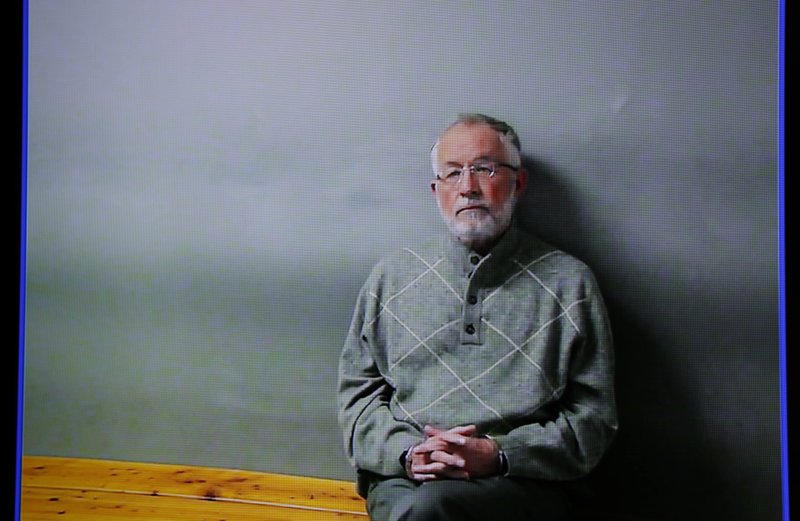 The sexual abuse scandal at Michigan State University widened Tuesday when authorities charged a former dean not only with failing to keep sports doctor Larry Nassar in line but with sexually harassing female students and pressuring them for nude selfies.

William Strampel, 70, is the first person charged since an investigation was launched in January into how Michigan State handled complaints against Nassar, who for years sexually violated girls and young women, especially gymnasts, with his fingers during examinations.

Strampel, who as dean of the College of Osteopathic Medicine oversaw the clinic where Nassar worked, neglected his duty to enforce examining-room restrictions he imposed on Nassar after a patient accused the doctor in 2014 of sexual contact, authorities alleged.

Nassar was not supposed to treat patients near any “sensitive areas” on the body without a chaperone present. Because Strampel did not follow up to make sure Nassar was complying, he was able to commit a host of additional sexual assaults until he was fired two years later, prosecutors said.

The criminal complaint also accused Strampel of soliciting nude photos from at least one female medical student and using his office to “harass, discriminate, demean, sexually proposition, and sexually assault female students in violation of his statutory duty as a public officer.”

His work computer was found to contain about 50 photos of female genitalia, nude and semi-nude women, sex toys and pornography, prosecutors said. “Many of these photos are of what appear to be ‘selfies’ of female MSU students, as evidenced by the MSU clothing and piercings featured in multiple photos,” according to the complaint.

It said the computer also had a video of Nassar “performing a ‘treatment’ on a young female patient.”

Strampel was accused also of grabbing two students’ buttocks at the college’s annual ball and a scholarship dinner.

Strampel spent Monday night in jail and was released Tuesday on $25,000 bail. The felony and misdemeanor charges — misconduct in office, criminal sexual conduct and two counts of neglect of duty — carry maximum penalties ranging from a year to five years behind bars.

“My client denies that he ever engaged in any inappropriate touching of anyone, any student or otherwise,” said his attorney, John Dakmak. “He denies that there was any quid pro quo for sexual favors in exchange for any type of standing within the university, or the medical school.”

Dakmak said the Nassar video most likely is one he used “around the country to show his technique in treating many patients.”

The defense attorney also disputed the notion that Strampel neglected his duty to oversee Nassar, saying it was the responsibility of the university’s Title IX investigators to ensure Nassar abided by the restrictions on his practice.

Bill Forsyth, hired as special prosecutor by Michigan’s attorney general to investigate the university, would not discuss the photos on Strampel’s computer or precisely how Strampel obtained them.

“This is an ongoing investigation,” Forsyth said at a news conference. “We would encourage anybody with information, whether it be about former Dean Strampel or whether it’s about anything at Michigan State that they’re concerned about, call the hotline at the attorney general’s office and report that.”

Nassar, 54, pleaded guilty to molesting patients and possessing child pornography and was sentenced to spend the rest of his life in prison earlier this year after roughly 200 women gave powerful statements against him in two courtrooms over 10 extraordinary days.

Strampel told authorities in 2017 that he did not check to see if Nassar was obeying the examining-room restrictions because Nassar had been “exonerated” in an investigation by police and the university. At least 12 reported assaults occurred after the probe ended, according to university police.

Nassar was fired in 2016 for violating the chaperone rules. Strampel announced his leave of absence as dean — citing medical reasons — in December. In February, interim Michigan State President John Engler announced plans to fire Strampel, who still has tenure that protects his employment as a faculty member.

In a statement, Engler said the charges against Strampel “confirm our belief that he has fallen far short of what is expected and required from academic leadership.”

More than 250 girls and women have sued Michigan State, Strampel and other current and former university officials, USA Gymnastics — where Nassar also worked — and others.

Ray Cassar, a Detroit-area defense attorney not involved in the case, said prosecutors might have a hard time proving the neglect-of-duty charges against Strampel.

“He may have had a moral duty or ethical duty. But they’re going to have to show he had an actual legal duty,” Cassar said. “Does the dean of the medical school have a duty to check every single employee to see if they’re complying with his directives?”