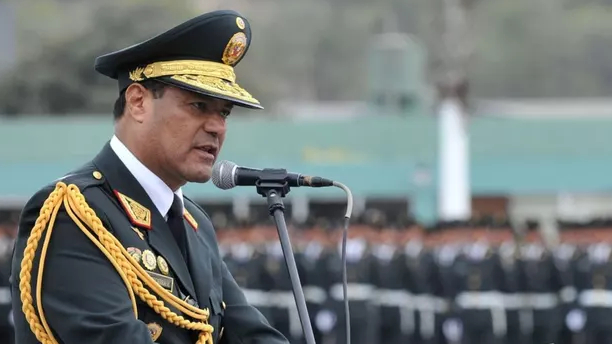 Raul Becerra, former head of the national police force, speaks during a police ceremony in 2016. Authorities in Peru said Tuesday that Becerra is accused of involvement in a baby trafficking ring. (Photo: AP)

A former head of the national police force is under arrest, accused of involvement in a baby trafficking ring, Peruvian authorities say.

Prosecutors say that Gen. Raul Becerra is among the 15 suspects of selling babies and children taken from poor women, and the suspected ringleader is Cintia Tello, the partner of the former police force director.

Both are accused of belonging to a baby trafficking organization which includes doctors, who took babies from poor women to sell.

Authorities say that a gynecologist and a pediatrician were also detained in early morning raids Tuesday in the industrial city of Arequipa, 560 miles (900 kilometers) south of Lima.

Investigators said they raided 18 homes and rescued a 5-month-old baby.

An investigation is underway by prosecutors to find out whether the babies were offered for illegal adoption by foreigners or, possibly, for organ trafficking.