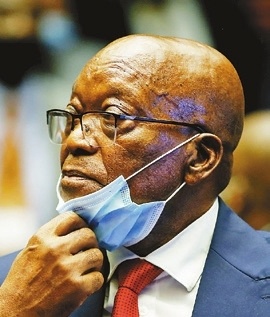 The court said Zuma should hand himself in to the police in Nkandla or Johannesburg police station to begin his prison sentence within five days.

“For the station commander or other officer in charge of that police station to ensure that he is immediately delivered to a correctional center to commence serving the sentence,” Justice Khampepe said.

Zuma has homes in Johannesburg and Nkandla.

The Court said that if Zuma failed to hand himself in to the police, the Police Minister Bheki Cele should within three days take all the necessary steps to make sure he was delivered to a correctional center.

The sentence came after Zuma refused to comply with the order of the court which ordered him to appear and testify at the state capture commission.

The commission was launched in January 2018 to investigate allegations of state capture, corruption, fraud and other allegations in the public sector including organs of state in South Africa.

In February, Zuma was given dates to appear at the commission but he refused, accusing the chair of the commission deputy judge Raymond Zondo of bias towards him.