WORLD Forum on Gaza reconstruction kicks off in Egypt

Forum on Gaza reconstruction kicks off in Egypt

CAIRO, June 10 (Xinhua) -- Cairo Construction Hub, a three-day forum on construction efforts in Arab countries, kicked off Thursday with a focus on rebuilding the war-torn Palestinian enclave of Gaza Strip. 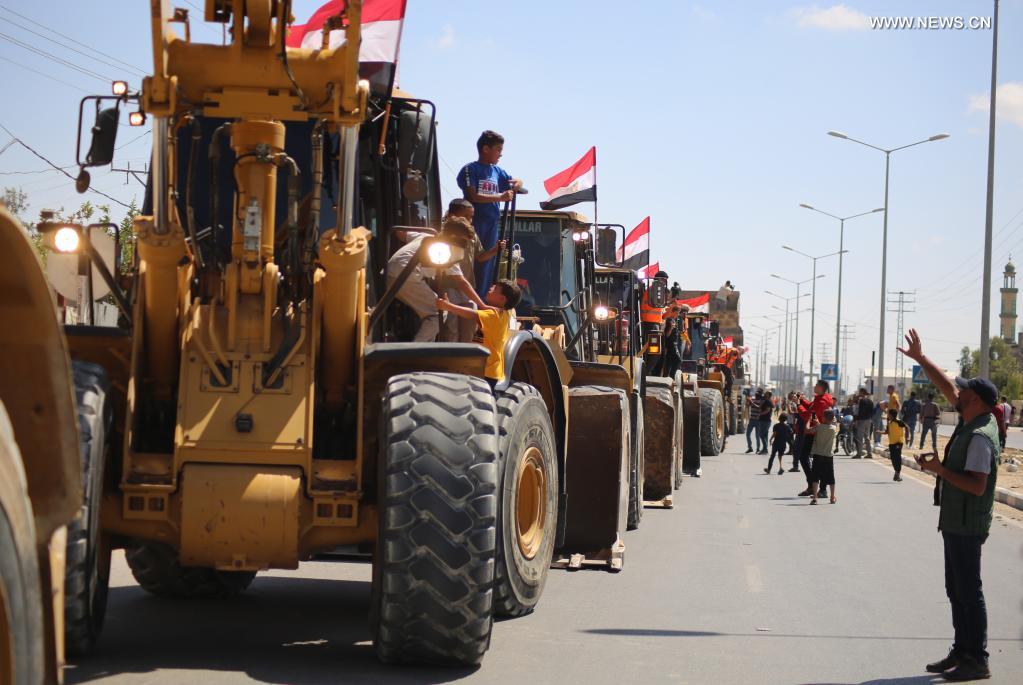 Bulldozers arrive at the Palestinian side of the Rafah border crossing in the southern Gaza Strip city of Rafah, on June 4, 2021. Egypt on Friday sent massive engineering equipment and crew to the Gaza Strip for its reconstruction after a devastating Israeli bombing campaign in the Palestinian enclave last month, state-run Ahram Online reported. (Photo by Khaled Omar/Xinhua)

Held in the Egyptian capital Cairo, the forum is a unique platform that features a series of events specialized in the discussions of urban development, construction, engineering, architecture, and building materials producers.

The forum was attended by a number of Egyptian and foreign businessmen, construction experts and officials, including the Palestinian ambassador in Cairo, Diab Al-Louh.

"The Gaza Strip is in urgent need for translating the reconstruction initiatives into actions on the ground," the Palestinian ambassador told Xinhua.

He highly appreciated the Egyptian efforts to reconstruct the Gaza Strip, while welcoming the Egyptian companies to participate in the reconstruction process in the blockaded coastal enclave.

In May, Egyptian President Abdel-Fattah al-Sisi pledged 500 million U.S. dollars for the reconstruction of the Gaza Strip, which suffered massive damages to its buildings and infrastructure from the May 10-21 Israel's aerial bombardments of the Palestinian enclave.

Egypt brokered a ceasefire on May 20 to end the 11-day fighting between Israel and Gaza's Palestinian militants, which left at least 250 Palestinians and 12 Israelis killed.

Al-Louh expressed the hope that donor countries will contract with local Palestinian companies to revive the economy in Gaza and reduce the unemployment rate there which has reached 50 percent.

Ahmed Abou Hashima, CEO of the Cairo-based Egyptian Steel and also a member of the Egyptian Parliament, said that the Egyptian companies have already started to implement President Sisi's initiative to rebuild the Gaza Strip.

"We are ready to provide the Gaza Strip with steel and cement," Abou Hashima told Xinhua, adding that this will also help Egyptian companies open new horizons for business expansion outside Egypt.