WORLD Fossil of Luzia, one of the oldest humans in the Americas, recovered from museum debris

Fossil of Luzia, one of the oldest humans in the Americas, recovered from museum debris

RIO DE JANEIRO, Oct. 19 (Xinhua) -- Brazil's National Museum announced on Friday that they managed to locate and recover an 11,000-year-old fossilized skull which was believed to have been lost in a huge fire last month. 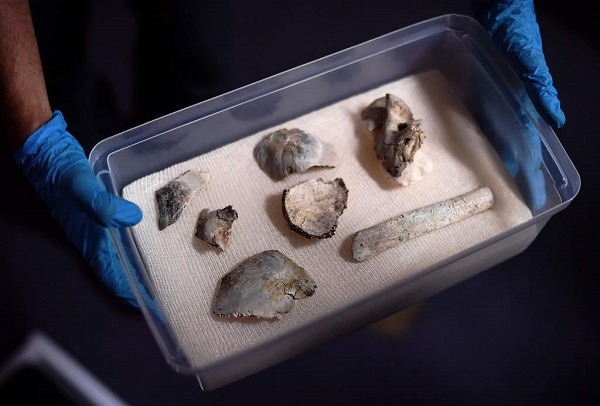 Fragments of the oldest human fossil found within today's Brazilian borders, known as "Luzia", which were found among the rubble of Rio de Janeiro's National Museum after a fire caused the destruction of the building, are displayed during a press conference in Rio de Janeiro, Brazil on October 19, 2018. (Photo: VCG)

The fossilized skull of a woman named Luzia, survived the massive fire which swept over the museum on Sept. 2 because it was kept in a box in a more reserved area. According to the museum staff, the entire skull was recovered and about 80 percent of the parts have already been identified.

"Today is a happy day: we managed to recover Luzia's skull and the damage was smaller than we thought," said museum representative Claudia Rodrigues. "The pieces were found a few days ago. Though they suffered alterations and damages, we are optimistic with the finding and all it represents."

Luzia was one of the most precious items of the museum's collection. Found in Brazil's Minas Gerais state in the 1970s, the fossil was responsible for changing the theories of human occupation on the American continent. Carbon dating showed that humans were present in the continent much longer than previously believed.

Brazil's 200-year-old National Museum located in Rio's north used to be the official residence of Portuguese and Brazilian royal families. It had a wooden structure and was in precarious conditions without any proper protection against fires.

Because of that, almost all the collections in the building were lost, including plant and animal specimens already extinct, the largest collection of Pompeii art outside of Italy, several Egyptian mummies, and extensive collections of indigenous and African items.

The museum team is searching for items in the building, but retrieval work has been impeded due to the building's unsafe conditions. The reconstruction of the museum is expected to last several years and cost hundreds of millions of reals.