Four more people were arrested following another night of violent protests over the jailing of a rapper for controversial tweets, police said on Saturday. 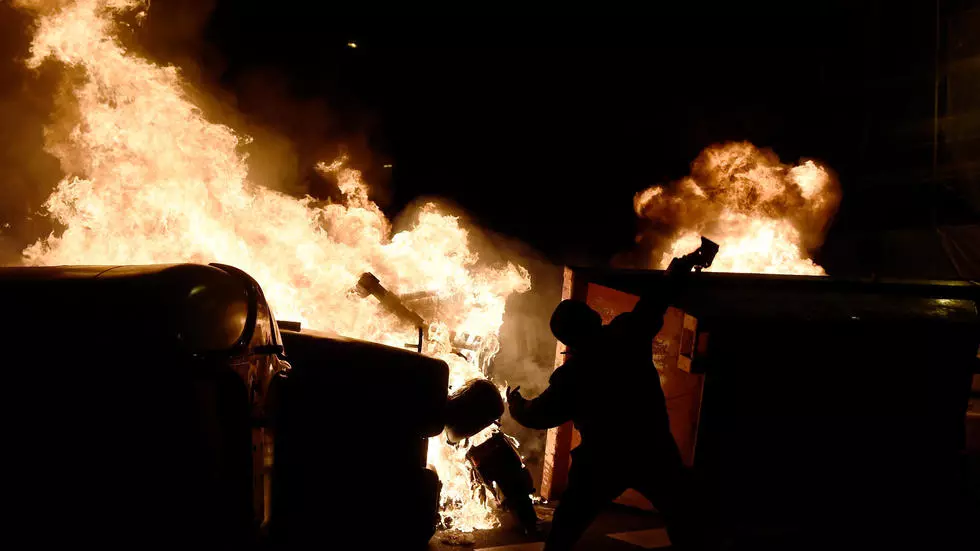 It was the fourth straight night that demonstrators had taken to the streets, although Friday night's the protests only occurred in the northeastern region of Catalonia.

A police spokesman said two people were arrested in Barcelona and another two in the northern city of Girona and that eight officers were injured in the clashes.

Angry demonstrations first erupted on Tuesday night after police detained rapper Pablo Hasel, 32, who was holed up in a Catalan university to avoid going to jail in a case that has raised concerns about free speech in Spain.

Worst-hit on Friday was Barcelona, where some 2,000 demonstrators gathered in the evening with the protest soon deteriorating into violence.

Hooded demonstrators hurled stones, firecrackers and bottles at police and torched barricades made of rubbish bins and restaurant chairs. At least one restaurant was also set alight.

They also smashed up several banks and shops, which suffered looting, police said.

More than 100 people have been arrested since the protests began, 16 of them on Thursday night. Scores of people have been injured, among them many police officers, but also a young woman who lost an eye after being hit by a foam round fired by police.

Although most of the protests started in Catalonia, where the rapper is from, they have spread to other cities including Madrid, the eastern city of Valencia and Granada in the south.

Further protests are expected on Saturday with rallies called in Barcelona, Madrid, the northern towns of Pamplona and Logrono and in Majorca.

The clashes have also sparked a political row that has exacerbated a divide within Spain's leftwing coalition, which groups the Socialists of Prime Minister Pedro Sanchez and the hard-left Podemos.

While the Socialists have firmly opposed the violence, Podemos' leadership has backed the protesters.

The party emerged from the anti-austerity "Indignados" protest movement that occupied squares across Spain in 2011. Their position is that the Hasel case exposes Spain's "democratic shortcomings".

Known for his hard-left views, Hasel was handed a nine-month sentence over tweets glorifying terrorism and videos inciting violence. The court ruling said freedom of expression could not be used "as a 'blank cheque' to praise the perpetrators of terrorism".

He was also fined about 30,000 euros ($36,000) for insults, libel and slander for tweets likening former king Juan Carlos I to a mafia boss and accusing police of torturing and killing demonstrators and migrants.