Four candidates go on to next round in UK leadership race 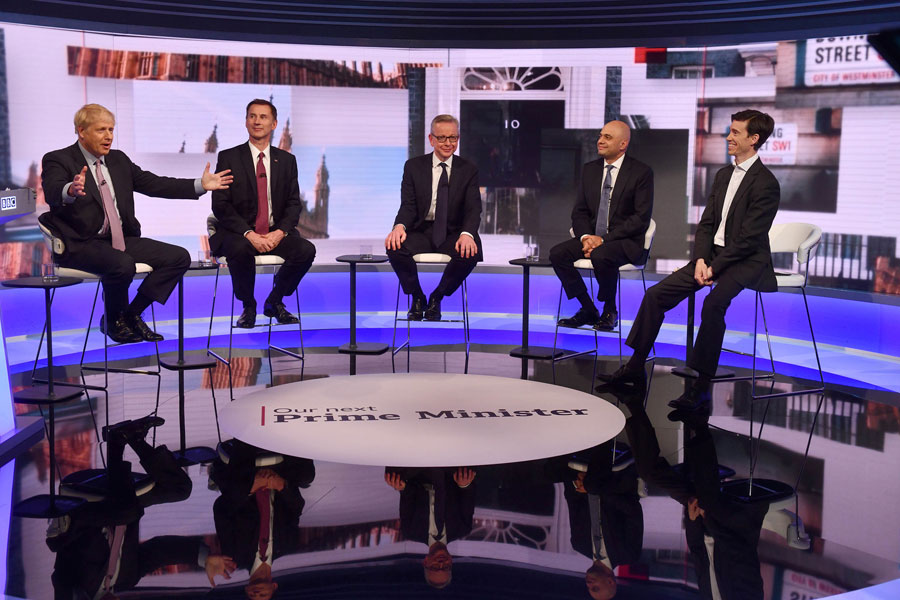 Candidates (from left) Boris Johnson, Jeremy Hunt, Michael Gove, Sajid Javid and Rory Stewart appear in a TV debate on Tuesday to explain why they want to replace Theresa May. Stewart has since been eliminated. [Photo by JEFF OVERS/BBC/REUTERS]

The race to be the next Conservative Party leader and Britain's next prime minister was cut to four candidates after the third ballot on Wednesday evening saw Rory Stewart eliminated.

There will be a fourth and possibly fifth ballot on Thursday after which the final two candidates will become known.

On Tuesday evening, the candidates set out their differing approaches to Brexit in a live BBC debate.

During the hour-long exchange the five were challenged on other issues including tax, Islamophobia and the environment. The five started by trading blows over whether to leave the European Union on Oct 31 with or without a deal.

The former foreign secretary and frontrunner in the race, Boris Johnson, came under unprecedented public scrutiny, having previously avoided any media invitations to set out his intentions.

On Brexit, Johnson denounced the idea of a flexible deadline, but when pressed he did not commit to Britain leaving the EU on Oct 31, saying only that it was "feasible".

"We must come out on Oct 31 because otherwise I am afraid we face a catastrophic loss of confidence in politics," he said.

Johnson insisted that keeping the no-deal option on the table was a necessary negotiating tactic with the EU, though he repeatedly insisted he did not want to pursue a "disorderly" no-deal Brexit as a first option.

"We have already kicked the can down the road twice and I think the British people are getting thoroughly fed up. Unless we get out on Oct 31, I think that we will all start to pay a really serious price."

Challenged to explain his "letterbox" comment about Muslim women wearing the veil, he avoided answering the question directly, saying: "In so far as my words have given offence over the last 20 or 30 years when I have been a journalist and people have taken those words out of my articles and escalated them, of course I am sorry for the offence they have caused."

Responding to a question on Islamophobia, Johnson said: "When my Muslim great-grandfather came to this country in fear of his life in 1912, he did so because he knew it was a place that was a beacon of hope and of generosity and openness, and a willingness to welcome people from around the world."

The leadership rivals rounded on Johnson over his plan to cut taxes for people earning more than 50,000 pounds ($63,000). The frontrunner said he would lift the National Insurance threshold for the low-paid but there should be a "debate" about the higher income tax rate.

"It does seem to be very odd that in the Conservative Party people should seriously question whether it is right to try to lift nurses and heads of maths departments and police inspectors out of the top rate of tax," he said.

Jeremy Hunt said: "What people accuse the Conservatives of is they say we are the party of the rich. We must never fall into the trap of doing tax cuts for the rich and confirming that prejudice."

The battle for second place is fierce, with the candidate that makes it through to the final ballot knowing they are likely to face off against Johnson.

Michael Gove challenged Stewart's principal claim that he is the only one being realistic about Brexit, while former health secretary Hunt pledged to put right past mistakes, admitting that cuts to social care had gone too far.

Sajid Javid, the current home secretary, said it was he who had shown real leadership when he committed his fellow candidates to holding an external investigation into alleged Islamophobia in their party.

After Thursday's vote, the hustings process begins across the nation and 160,000 party members will decide in a postal vote between the final two candidates. The new leader will be announced during the week of July 22.