WORLD Four dead as severe storm sweeps through southern US

Four dead as severe storm sweeps through southern US 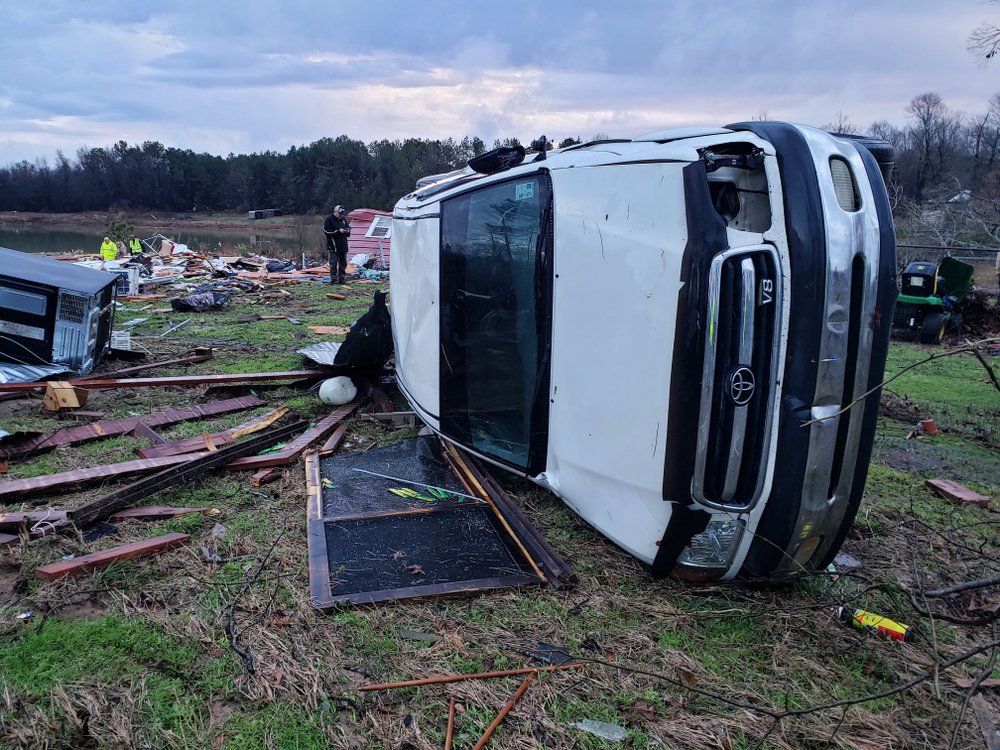 Authorities say at least four people have died as severe storms sweep across parts of the US South, bringing high winds and unrelenting rain.

The Bossier Parish Sheriff’s Office in Louisiana said on Facebook that firefighters found the bodies of an elderly couple Saturday near their demolished trailer. The winds were so strong that the home was moved 200 feet from its foundation.

The deaths of the victims, who were the in-laws of a parish deputy, brings the storm-related toll in the state to three after a man was killed when a tree fell on his home in Caddo Parish on Friday.

Bossier Parish Sheriff Julian Whittington told The Associated Press that a truck driver and a Benton police officer had a close call after being shocked by a downed power line.

“A power line was hanging across the road and a eighteen wheeler truck ran into it and got hung up in it and the Benton officer got there to help him,” Whittington said. Both were expected to survive.

Arkansas, Oklahoma and Texas on Saturday morning were clear of the severe thunderstorms that had passed through the night before. One person died Friday night in Texas when a car flipped into a creek in Dallas. Additionally, lightning from Friday’s stormy weather is suspected of causing two house fires in the North Texas cities of Burleson and Mansfield. Officials said no one was injured.

Homes were damaged or destroyed in Missouri, Oklahoma and Arkansas on Friday, but no injuries were reported. Downed trees and power lines were widespread.

The Oklahoma Department of Transportation reported Saturday morning that portions of several highways in the southeastern part of the state were closed due to flooding. The Arkansas Department of Transportation reported that portions of several state highways across the state, particularly in the southeastern portion of Arkansas were closed due to downed trees and power lines and to flooding.

On Alabama’s Gulf Coast, Baldwin County canceled school activities including sporting events for Saturday. The National Weather Service warned of high winds and flooding and the potential for 10-foot-high (3-meter-high) waves on beaches, where northern visitors escaping the cold are a common sight during the winter.

Many streams already are at or near flood levels because of earlier storms, and heavy rains could lead to flash flooding across the region, forecasters said. Parts of Arkansas, Tennessee, Mississippi, Missouri, Illinois and Indiana were under flash flood warnings or watches on Saturday.

The storm, bringing the threat of ice and snow to the Chicago area, prompted the cancellation of about 1,000 flights Saturday at Chicago’s two main airports.

Delays at O’Hare and Midway were averaging around 15 minutes, the department said.

The weather service issued a winter weather advisory, flood watch and lakeshore flood warning for the Chicago metropolitan area for Saturday and a winter storm warning for adjacent areas of northwestern Illinois.

Breezy conditions were forecast with gusts as high as 45 mph (72 kph).