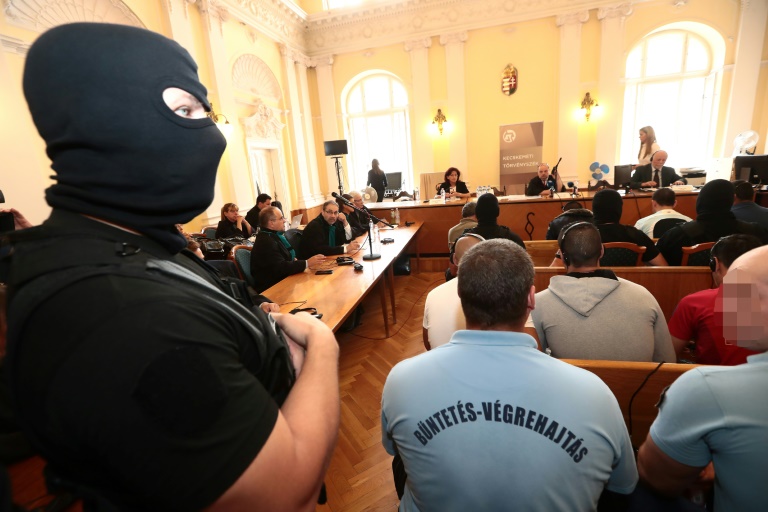 A policeman stands guard in the Hungarian courtroom Thursday as four key suspects are sentenced to 25 years in jail for the gruesome deaths of 71 migrants.(Photo: AFP)

The four main suspects involved in the gruesome deaths of 71 migrants in a truck on an Austrian highway in 2015 were jailed for 25 years Thursday, in a case that sparked international revulsion.

The ruling followed a year-long trial in Hungary, which took over the proceedings from Vienna after it emerged that the migrants had suffocated on Hungarian soil.

Prosecutors, who had asked for life terms without parole, immediately appealed the sentence after the ruling, arguing that it was too lenient.

Ten other suspects were also found guilty over the deaths and handed prison sentences of up to 12 years by the court in the southern town of Kecskemet. Three were tried in absentia.

The men were allegedly members of a trafficking gang based in Budapest, which smuggled more than 1,200 people into western Europe at the height of the continent's 2015 migrant crisis.

The bodies of the 59 men, eight women and four children -- including a baby girl -- were already in an advanced state of decomposition when they were discovered in an abandoned poultry refrigerator lorry on August 27, 2017.

Investigations showed they had been dead for two days, suffocating shortly after being picked up in Hungary, then a key transit country on the Balkan migrant trail.

The ringleader, a young Afghan, and the other mostly Bulgarian suspects denied knowing that the migrants were dying in the back.

But evidence presented to the court indicated they had been aware of what was happening.

"The four main accused knew that inaction on their part could lead to the deaths of the victims," Judge Janos Jadi said in Thursday's ruling.

"It's clear that the defendants were well aware that these vehicles were not suited for human passengers, this is torture under the law even if the passengers were not beaten by the smugglers."

The victims -- all from Syria, Iraq and Afghanistan -- had been part of hundreds of thousands of desperate people fleeing war and misery in the Middle East and elsewhere in 2015, triggering Europe's worst migrant crisis since World War II.

The deaths led a shocked German Chancellor Angela Merkel to announce she would open her country's doors, eventually allowing in more than one million refugees, mostly from Syria.

Hungarian officials said the ring was a professional network with more than 15 vehicles used to transport refugees who were trekking up from Greece along the western Balkans to Europe.

In court, the defendants denied knowing that their human cargo was dying.

The ringleader Samsoor Lahoo, himself a young Afghan of 31 who had fled his country, told the court in a final statement that he "had not wanted anyone's death".

But police telephone intercepts of calls revealed he had ordered the truck drivers not to open the doors.

"Let them die instead. That's an order," Lahoo allegedly says in one of the calls.

"If they die, let him dump them in a forest in Germany," he adds.

Challenged with this evidence, Lahoo told the court they were simply "thoughtless remarks".

Hungary's legislation regarding trafficking was tightened in the aftermath of the death truck case.

The judge earlier explained his sentences were more lenient than prosecutors had requested because he was applying the law that was in force at the time of the crime.

For prosecutor Gabor Schmidt, Lahoo showed only "endless greed" and "frightening indifference" to migrants desperate to get to Europe.

"The ruling does not sufficiently reflect the seriousness of the crime," he told the court after Thursday's verdict.