Greece announced a new coronavirus death on Sunday, the country's youngest fatality, bringing the toll to four, while police arrested citizens that defied a lockdown. 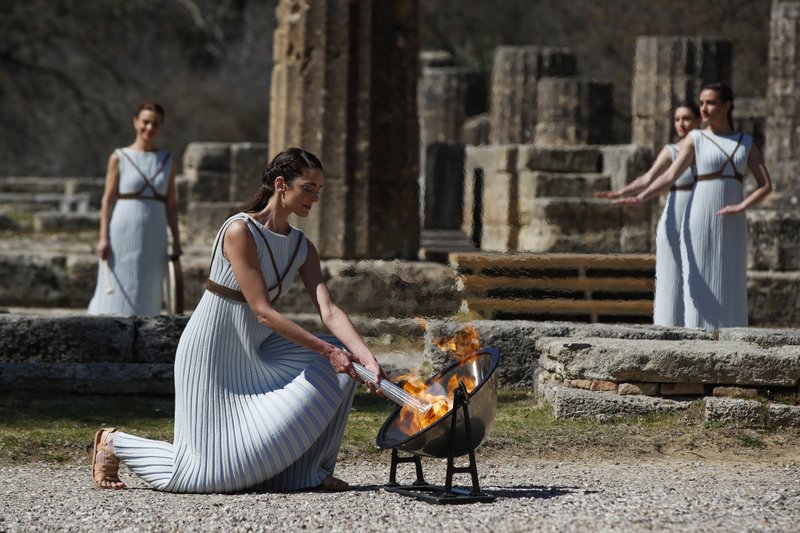 Greek actress Xanthi Georgiou, playing the role of the High Priestess, lights up the torch during the flame lighting ceremony at the closed Ancient Olympia site, birthplace of the ancient Olympics in southern Greece, Thursday, March 12, 2020. (Photo: AP)

The 53-year-old man, who had been in intensive care, died early on Sunday, the director of the AHEPA Hospital, Panagiotis Panteliadis told the Athens News Agency.

He had been working in a medical laboratory in the northern city of Kozani.

The first fatality had been a 66-year-old man in Patras on Thursday.

All men had existing health problems.

Greek authorities on Saturday said that an additional 38 patients had been infected by the new coronavirus, raising the total to 228.

They also said that only people with pneumonia symptoms and belonging to vulnerable groups would now be tested in public hospitals.

Greece is suspending remaining flights to and from Italy, and closing beach resorts -- thwarting attempts by Greeks hoping to enjoy the fine weather there after bars and restaurants were closed.

Supermarkets, pharmacies and medical facilities have been allowed to stay open as well as shops and boutiques.

But crowd controls for supermarkets are to start Monday, when only one person per 10 square meters (107 square feet) will be allowed.

All tourism accomodations are being closed until April 30.

The government had already shut down schools and universities, courts, cinemas and gyms, and banned indoor public gathering areas for two weeks.

Police said it had arrested 96 people that hadn't followed the new rules since Thursday.

A torch relay for the Tokyo 2020 Games was cancelled after Hollywood actor Gerard Butler, who starred in the 2007 epic "300", was mobbed as he lit a cauldron in the city of Sparta.

"We are obliged to warn people that the next month will be very difficult", Greek prime minister, Kyriakos Mitsotakis said in an interview with the Proto Thema newspaper.

Some orthodox churches, meanwhile, were crowded with people, even after Archbishop Ieronymos called for "a spirit of responsibility".