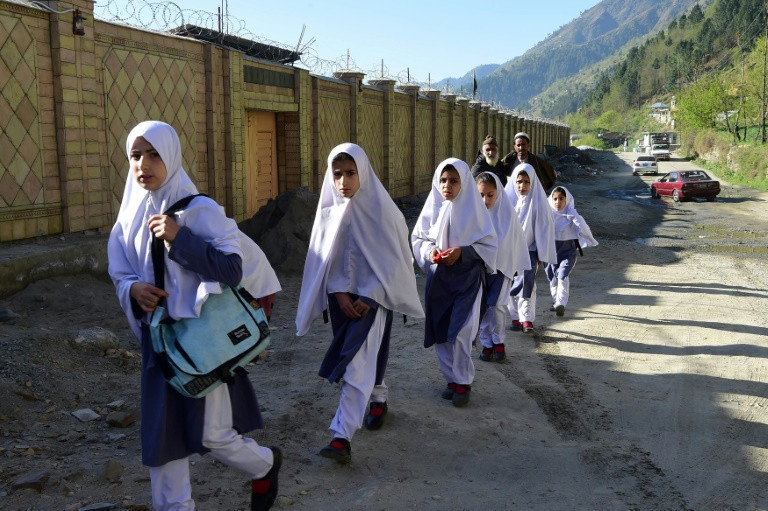 Opened just over two weeks ago, the building hosts 183 students, most between the ages of five and 12.(Photo: AFP)

Dozens of girls in grey-and-white uniforms trooped into a building beneath a pine-covered ridge in Pakistan's mountainous Shangla district Friday for classes at the school built with Malala Yousafzai's Nobel Prize money.

The Khpal Kor Model School, three storeys tall and with a computer lab, playground and library, is a symbol of the change that Malala has helped bring to a deeply conservative region where she was once one among many girls struggling to receive an education.

But with many parents afraid to speak to the media for fears the building would be targeted by militants, it is also a sign of how far Pakistan has to go in its long battle with extremism, even in a region that it regularly touts as a security success story.

"We don't want this school to be publicised because if it happens, militants will target it," one parent said on condition of anonymity.

Opened just over two weeks ago, the building hosts 183 students, most between the ages of five and 12. Thirty-eight of them are orphans.

The road leading to its solid yellow gate is paved only partially, and girls walking up it are often escorted by fathers or elder brothers.

Some, said principal Sajid Shah, are transported by the school -- an initiative paid for, along with the books, uniforms, tuition for the orphans and poorer students, teachers' salaries and the building itself, by the Malala Fund.

Police have promised they will soon deploy three officers to guard the campus. When AFP visited Friday, they had not yet arrived.

The school is built on the outskirts of Shahpur, a town in Malala's home district of Shangla -- part of the region known as Swat, the scenic valley once infested by the Pakistani Taliban.

In 2007, the militants took control, waging a campaign of beheadings, other violence and attacks on girls' schools before the army deployed 30,000 troops in 2009, declaring it secure by July that year.

Since then Pakistani and at times US officials have held up Swat -- recently designated a safe tourism destination once more -- as a success story in the country's fight against Taliban and Al-Qaeda-linked militants.

But critics have long warned that Pakistan is not doing enough to fight the root causes of extremism, and beneath the surface peace in Swat was always fragile, as the attack on Malala herself three years later demonstrated.

By then she and her family had moved to Mingora, the main town in neighbouring Swat district -- also part of the Swat region -- and it was there that gunmen stopped her school bus on October 9, 2012, asked for her by name, and shot her in the head.

Her near-miraculous survival and subsequent fierce education campaigns have turned her into an instantly recognisable force for human rights.

But her emotional return to Pakistan Thursday for the first time since the shooting has refocused attention on Swat.

Security there has improved "significantly", analyst Rahimullah Yusufzai said Friday, but rare attacks -- such as one that killed 11 soldiers in Swat on February 18 -- show the danger is not yet over years on.

"They (the militants) still have their facilitators and sleeper cells there," Yusufzai told AFP.

In Shangla, Afshaar Alam, a medical student who is guardian to his seven-year-old sister attending the Khpal Kor school, said it was the best school in the area.

However his family had opposed his decision to send her there, he said, "fearing it may be targeted".

Militancy aside, residents in Shangla said life in Swat was changing for girls and women, particularly in a conservative region where their access to education had long been problematic.

Education is highly valued in Swat, which is also plagued with natural disasters such as earthquakes and floods that in the past have left children studying in the open air even through harsh winters.

"I am grateful to Malala for her invaluable efforts to promote education, a task our leaders failed to accomplish," Shangla shopkeeper Farman Ullah said after dropping his three daughters at the school.

"We have just one Malala today but after a decade or so, we will have Malalas everywhere."

There was still no word Friday on whether the 20-year-old herself would go to Swat during her brief, unannounced visit to Pakistan.

Her schedule is being kept tightly under wraps out of security fears, which Yusufzai said was telling.

"Not taking her to her hometown means they are not confident," he said, referring to the government and military establishment.

"If the government can't provide her security, then what does it mean?"