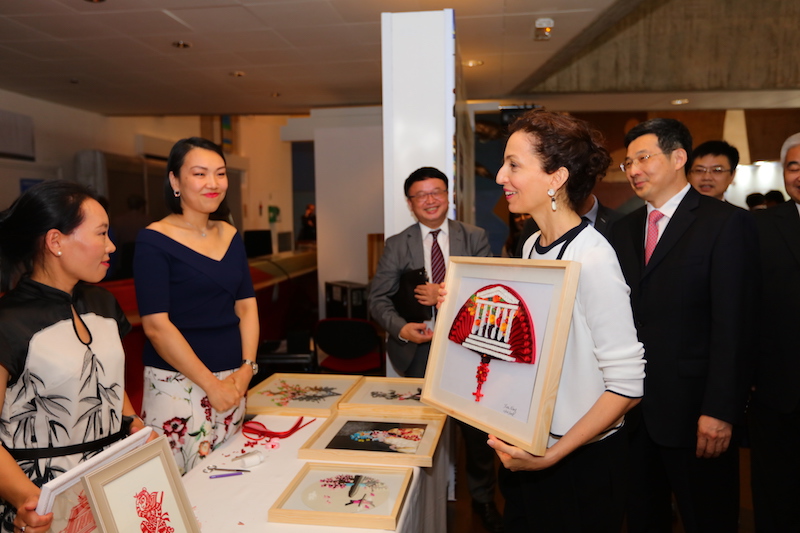 Paris (People's Daily) -- Artworks made with salted fish, a redesigned UNESCO logo with Chinese traditional elements and praise for Beijing’s support of UNESCO’s flagship magazine marked the beginning of a campaign to promote the country's international image on Tuesday at the United Nations Educational，Scientific，and Cultural Organization (UNESCO) headquarters in Paris, France.

Chinese official Zhuang Rongwen delivered a speech at the opening ceremony for the campaign, saying, "I hope everyone will feel China, experience China and comprehend China in a comprehensive, multi-dimensional and close-up manner.”

Versions of the campaign, dubbed "Experience China," have been launched in many countries around the world since 1999, becoming an important platform for cultural exchanges.

As part of the campaign, an exhibit called "Museum and Innovation — 40 Years of Chinese Design" was held at the Espace Commines in Paris.

Highlights of the exhibit include books made out of cake, and paintings made from salted fish. Michel Nau, a French art critic and collector obsessed with Chinese contemporary art, stopped in front of the exhibit, and said, "These artworks not only represent the traditional Chinese concept of harmony between mankind and nature, but also reflect the joint pursuit of environmental protection in China and the world.”

Also at the exhibit, Wang Xue , a young Chinese freelance artist based in Paris,  showed her work to visitors. Earlier in the day, she presented Director-General of UNESCO Audrey Azoulay a UNESCO logo redesigned by her.

At UNESCO headquarters, the first ever forum dedicated to the UNESCO magazine Courier was held.

Founded in 1948, Courier is the flagship magazine of UNESCO, dedicated to advocating UNESCO's philosophy, driving dialogue among different civilizations and fostering concepts of peace and culture.

The guests at the forum thanked China for its strong support to the magazine and UNESCO's work.

On behalf of UNESCO, Azoulay acknowledged the significant role of Courier by saying, "Losing Courier is like a man losing his eyes. With the support of China, we have recovered the momentum of development, found strength to think about war and peace, science and ethics, and share our works with the world.”

Jasmine Sopova, editor-in-chief of Courier, said that China helped expand the magazine from six languages to more than 20 languages, making it possible to pass on the enthusiasm in defending dignity, thought, and wisdom since its establishment.

Zhuang noted that China is an important founding member of UNESCO. The Chinese government has been actively participating in various UNESCO projects.

Chinese President Xi Jinping visited the UNESCO headquarters in March 2014 and delivered an important speech, which showcased China's mission as a responsible power to promote the world's cultural prosperity and human development, and opened a new chapter in the cooperation between China and UNESCO, said Zhuang.

The Chinese government is willing to make utmost efforts to support and participate in UNESCO's undertakings as it has always done, said Zhuang.

China is to open up new areas, expand new channels, and build up new platforms for cooperation on the basis of the existing cooperation, so as to contribute China’s strength to enhancing exchanges and experience sharing among different civilizations, constructing a community of common destiny for mankind and making a better future for the world, added the deputy director.