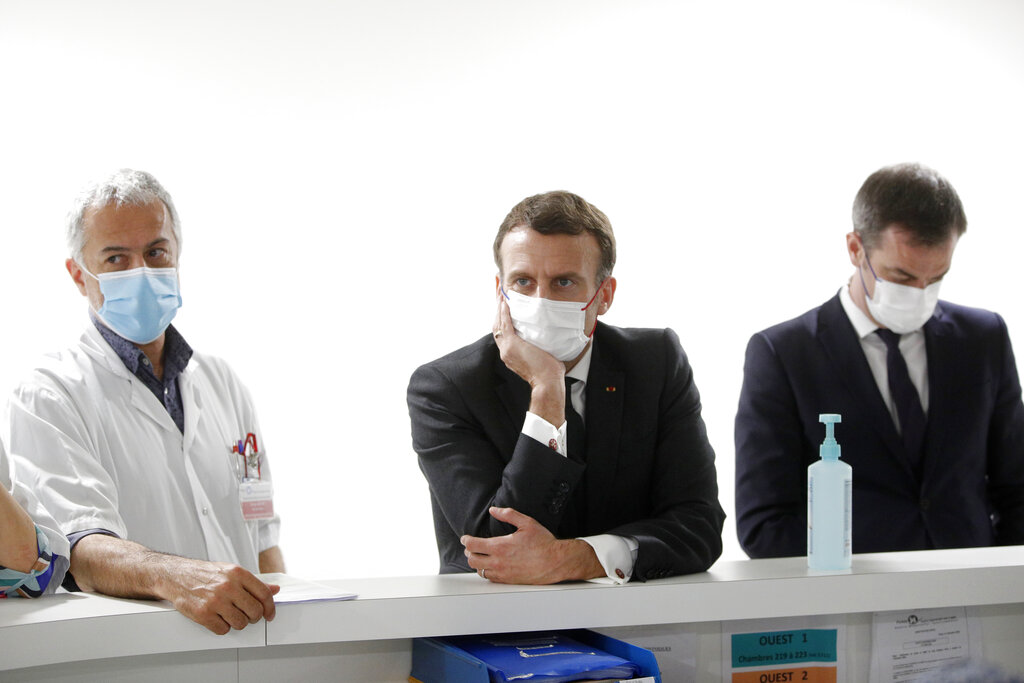 The French government backed off Thursday from ordering a tough lockdown for Paris and several other regions despite an increasingly alarming situation at hospitals with a rise in the numbers of COVID-19 patients. Instead, the prime minister announced a patchwork of new restrictions while reducing the national curfew by one hour.

Getting large doses of fresh air is being encouraged, meaning that people living in the Paris region and in the north of the country can walk as long as they like in a day, but within a 10-kilometer (6-mile) radius of their homes and with a paper authorizing the stroll.

Stores, however, will feel the pinch with all non-essential outlets — but not bookshops — closing down. And travel between regions is forbidden without a compelling reason.

Nothing will change at schools, which are to remain open, but sports activities will now be allowed.

Prime Minister Jean Castex announced the new rules, which will take effect as of midnight Friday and last for at least four weeks. He referred to “massive new measures” to “slow down (the virus) without locking down people.”

“I also know the deep wish of many of you to enjoy the outdoors, since the crisis has gone on for one year and Spring is coming,” Castex said.

He also announced that the French would be able to get inoculated with the AstraZeneca vaccine starting Friday afternoon — and that he himself will be getting a shot “to show we can have complete confidence." Castex is making for himself an exception to the age rule, moving to the front of the line of those awaiting vaccinations, currently reserved for people 75 and older or with serious health concerns.

France and some other countries briefly suspended use of the vaccine over fears of blood clots, and are resuming it after the European Medicines Agency gave its green light earlier Thursday.

Castex said France faces a “third wave” of the pandemic, with three-quarters of new cases from the more contagious variant that originated in Britain, and more patients who are younger and in better health.

“The situation is deteriorating,” he said.

But the prime minister insisted that France was sticking to its “third way” of dealing with the virus: “Pragmatic, proportional and regional,” targeting problematic areas.

The Nice area and, in the north, the Pas de Calais and Dunkirk region, have been in full weekend lockdowns. The north, the Paris region and several others are now being targeted, but with a mix of carrot and stick measures.

People all over France have been under a 6 p.m. to 6 a.m. nationwide curfew for two months. The curfew will now begin an hour later.

In addition, restaurants, bars, cinemas, gyms, museums, theaters and concert halls have been shut down for almost five months, and will remain closed.

French President Emmanuel Macron’s government had hoped the measures already in place would spare the country of 67 million from the economic, social and psychological impact of another lockdown.

Yet confirmed infections and demand for ICU beds have both risen steadily in recent weeks. The U.K. virus variant accounts for most infections, and around 250 people are dying each day from the virus.

Government spokesperson Gabriel Attal had warned Wednesday that the new measures to be announced Thursday could include lockdowns in the Paris region, which is home to 12 million people, and in Hauts-de-France, the region bordering Belgium in northern France.

“A localized strategy remains a good strategy. It enables (us) to limit precisely and proportionally the spread of the virus," he said.