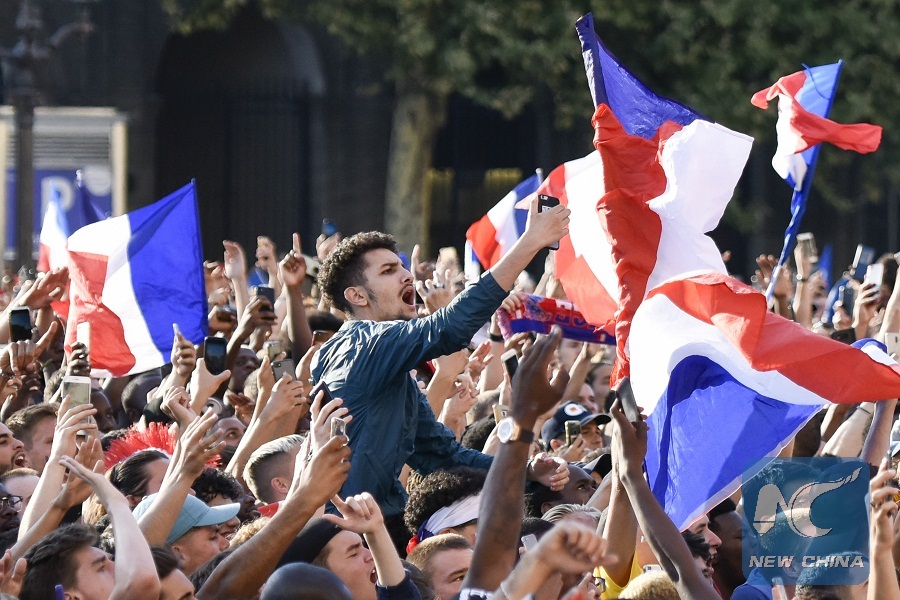 Fans cheer the French team in Paris, France on July 10, 2018. Parisians gathered on Tuesday evening at the Hotel de Ville of Paris to support the French team who defeated the Belgian team by 1-0 during the semi-final of 2018 Russian World Cup. (Photo: Xinhua)

The French government pledged to mobilize massive security staff at the weekend across French cities where festivities are planned to mark the National Day and World Cup final between France and Croatia, French Interior Minister Gerard Collomb said on Friday.

"National holiday, World Cup soccer final, Tour de France ... the weekend of 13 to 15 July seems to be exceptional. The security forces and medical staff will be fully mobilized to ensure the smooth course," the minister said.

In details, the government will deploy 110,000 police officers and gendarmes, 44,000 firefighters and 143 mobile force units to guarantee calm during the festivities, Collomb added.

"Throughout the weekend, special measures will be implemented in Paris," where 12,000 officers will be mobilized, according to the minister.

Hosted in Russia, the World Cup final between France and Croatia is expected to draw massive crowds to the country's streets where fans zones and security perimeters will be set up to make it possible to monitor access and facilitate luggage checks and vehicles.

In 2016, a truck ploughed at high speed into a crowd watching the fireworks to celebrate the French National Day in Nice, south France. 86 revellers were killed in the attack.