French Finance Minister Bruno Le Maire said Tuesday that there is a "total determination" from all 27 European Union countries for sanctions against Russia that could target oil and coal over the Ukraine crisis. 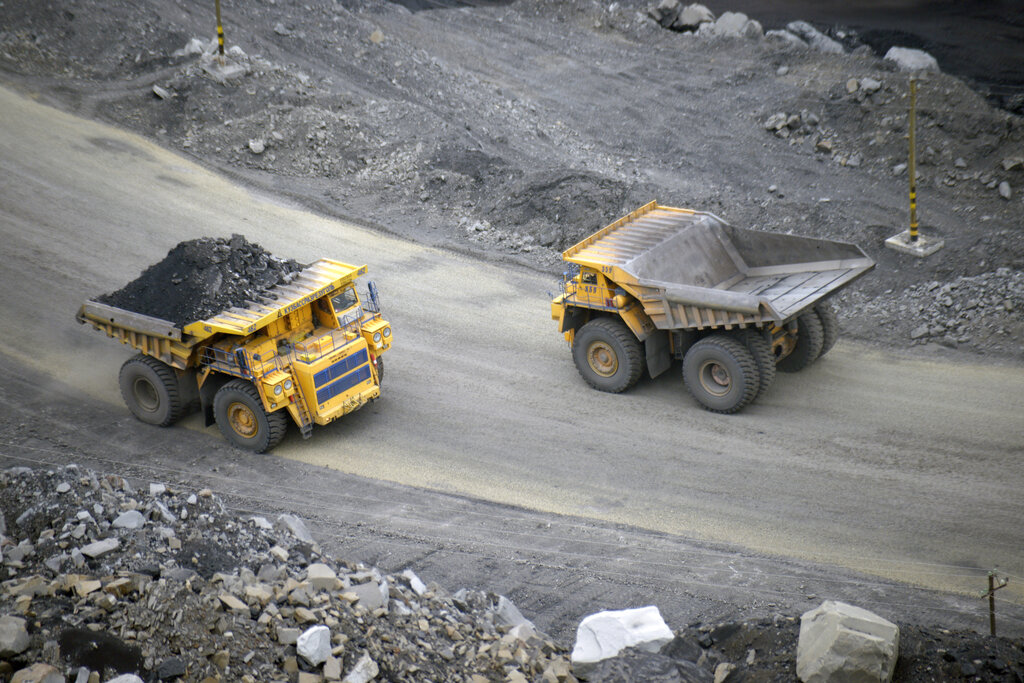 A loaded dump truck passes an empty truck as it carries away coal at the Kedrovsky open-pit coal mine in Kemerovo, Russia, Tuesday, June 16, 2015. (File photo: AP)

So far, Europe has not been willing to target Russian energy over fears that it would plunge the European economy into recession. In some ways, it would be easier for Europe to cut off Russian oil than natural gas because most oil supplies come by tanker and could be purchased from others. But talk of a possible boycott of Russian oil already has helped push up global oil prices this week.

Asked whether there was a political willingness to impose sanctions on Russian oil and coal — a move suggested this week by French President Emmanuel Macron — Le Maire said: "We will see what the position of the other member states will be, but I think there is a possibility to have unity on the 27 member states on these new sanctions."

He did not mention natural gas, and a consensus on targeting the fuel that is used to generate electricity and heat homes would be even more difficult to secure. The EU gets about 40% of its natural gas from Russia and many EU countries, including Germany — the bloc's largest economy — are opposed to cutting off gas imports.

France holds the presidency of the EU Council, and Le Maire spoke ahead of a meeting of EU finance ministers in Luxembourg, where they will discuss possible new measures to punish the Kremlin.

While the EU has stayed away from sanctioning Russian energy so far, individual countries have announced efforts to draw down their reliance: Poland said it plans to block imports of coal and oil from Russia, while Lithuania said it's no longer using Russian natural gas.

The European Union gets about 25% of its oil from Russia, while the EU imported 53% of hard coal from the country in 2020, which accounted for 30% of the EU's hard coal consumption.

While coal and oil may be up for discussion, Teresa Ribera, Spain's Minister for Ecological Transition, said Tuesday that it is "very hard" for the EU to sanction Russian natural gas because some of the bloc's countries are dependent on it for their energy supply and that the EU's strength lies in its unity.

"It is very difficult to explain to European public opinion and Ukrainian society that we are still importing Russian energy that finances this war," she said, adding that energy imports create "obvious moral tension."

European importers pay about $850 million per day for Russian oil and natural gas.

Russian natural gas mostly comes by fixed pipeline and would be harder to replace suddenly with shipments of expensive and scarce liquefied natural gas. While oil might be easier to cut off than gas, ditching it would not be without consequences.

For one, the resulting price increases for other oil could increase the incentive for India and China, who aren't taking part in Western sanctions, to buy cheaper Russian crude. Russia is also a major supplier of diesel fuel; if that supply were lost, operating diesel-powered trucks and farm equipment could quickly become more expensive, fueling already high inflation in Europe.

International benchmark Brent rose 3% on Monday and traded Tuesday above $108 per barrel, up another 1%. US crude rose 1.1% to $104.37 on Tuesday. Crude prices had fallen after U.S. President Joe Biden last week announced the release of 180 million barrels of oil over six months from strategic reserves. Higher oil prices mean more expensive gasoline for U.S. drivers.

The next package of EU sanctions will be prepared by the EU's executive arm, the European Commission, which will then present it to EU countries for approval.