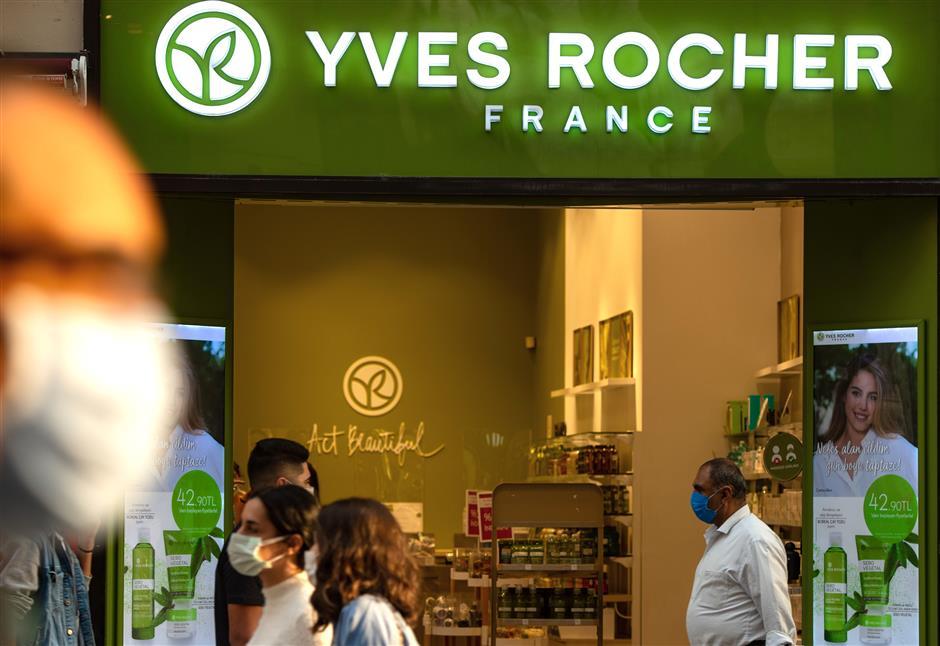 People walk in front of a French brand shop “Yves Rocher” in Istanbul, Turkey on Monday. Turkish President joined calls for a boycott of French goods on the same day. (Photo: agencies)

Pakistan summoned the French ambassador in Islamabad on Monday in the latest expression of anger in the Muslim world over France displaying images of the Prophet Muhammad that Muslims consider blasphemous.

In Bangladesh, protesters on Monday unfurled placards with a caricature of French President Emmanuel Macron and the words: “Macron is the enemy of peace,” while over the weekend a group of Kuwaiti retailers removed French products from their shelves.

The row has its roots in a knife attack outside a French school on October 16 in which an 18-year-old man of Chechen origin beheaded Samuel Paty, a middle school teacher who had shown pupils cartoons of Muhammad in a civics lesson.

French officials said the beheading was an attack on the core French value of freedom of expression and defended the right to publish the cartoons.

Macron hailed Paty as a “hero” for representing the secular, free-thinking values of the French republic, which include a long-cherished right to mock religion. “He was killed because Islamists want to take our future,” Macron said at a memorial for Paty. “They will never have it.”

In the days that follows, the caricatures were projected on buildings, and people displayed them at protests around the country. Several suspected Islamic radicals have been arrested in dozens of raids since the murder, and about 50 organizations with alleged links to such individuals have been earmarked for closure by the government.

The French response to the teacher’s killing unleashed outrage in several Muslim-majority countries, where people accused France’s rulers of being Islamophobic and needlessly provoking Muslim believers.

The French ambassador in Islamabad was summoned to the foreign ministry there a day after Pakistani Prime Minister Imran Khan accused Macron of “attacking Islam.” Khan also called on Facebook to ban Islamophobic content on its platform.

Some in the Muslim world have advocated a boycott of French goods. At a supermarket in Kuwait City on Sunday, shelves previously stocking skincare products made by L’Oreal and sister brand Garnier had been cleared. The boycott was being enforced by a Kuwaiti union that groups more than 70 outlets in response to “repeated insults” against the Prophet, the union’s head said.

In Saudi Arabia, the Arab world’s largest economy, a hashtag calling for the boycott of French supermarket chain Carrefour was the second most trending on Sunday.

In response to the expressions of anger, France has stood firm. In a Tweet on Sunday, Macron said France respected all differences in a spirit of peace but he also said: “We will not give in, ever.”

The head of France’s MEDEF employers’ federation said on Monday the boycott, which he described as “foolishness,” was clearly bad news for companies already hard hit by the coronavirus pandemic.

“But there is no question of giving in to blackmail,” Geoffroy Roux de Bezieux told broadcaster RMC. “There is a time to put principles above business.”