PARIS, May 11 (Xinhua) -- France is on its way to coming out of the health crisis as COVID-19 indicators continue the downward trend and vaccine rollout is speeding up, according to French Prime Minister Jean Castex. 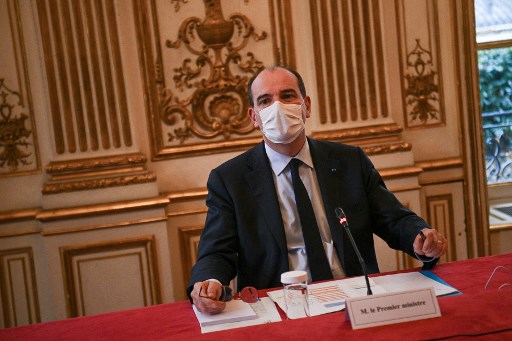 "I say it in the clearest way: we are finally in the process of emerging sustainably from this health crisis," Castex told Le Parisien newspaper in an interview published Monday evening.

The country's reopening would be gradual and cautious, allowing the government to implement "braking measures in case the epidemic situation gets out of hand locally," he said.

Under the government's four-phase calendar for a return to normalcy, limits on travel were lifted and colleges and high schools reopened on May 3, while a night-time curfew is still in place.

From May 19, non-essential shops will reopen. Restaurants and cafes will be allowed to receive on terraces a maximum of six people per table. Museums, theaters, cinemas and sport facilities will also reopen, with a limit of 800 people indoors and 1,000 outdoors.

Gyms will resume activities and foreign tourists are allowed entry from June 9 with a "health pass." All the restrictive rules to contain the virus will be lifted at the end of June.

Asked whether France could witness a fourth epidemic wave when restrictions are lifted, Castex noted that "nothing should be excluded," while urging people to remain vigilant.

On Monday, the number of people hospitalized for COVID-19 decreased for the seventh straight day to 25,666, including 4,870 in intensive care units, the lowest level since March 27.

Some 18.1 million people in France have received at least one vaccine dose, representing 34.5 percent of the adult population, and nearly 8 million have received both jabs.

The French government aims to administer 20 million shots by mid-May and inoculate a total of 30 million, or two-thirds of the adults, by mid-June.