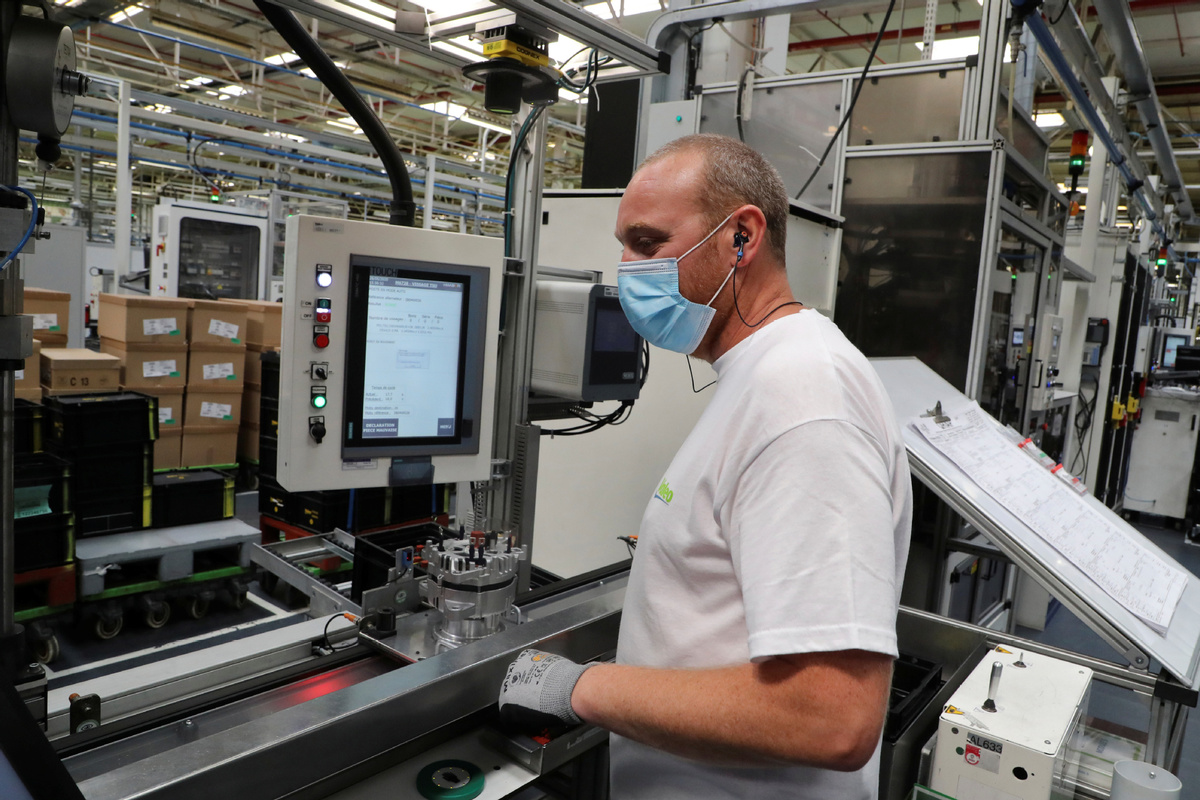 An employee wearing a protective face mask works at a factory of manufacturer Valeo, during a visit of French President Emmanuel Macron as part of the launch of a plan to rescue the French car industry, in Etaples near Le Touquet, France, May 26, 2020. [Photo/Agencies]

France's economy is likely to contract by 20 percent in the second quarter (Q2) this year, deepening a recession in the eurozone's second-largest power where the coronavirus crisis had prompted the worst post-war economic turmoil, national statistics institute INSEE said on Wednesday.

INSEE added that the economy could contract 8 percent for the whole year of 2020 if activities return to the pre-crisis level by July.

However, "such a rapid return to normal seems unrealistic," it noted. "Despite the massive monetary and budgetary support, there are many reasons for the economy not to return to normal before long months."

The French economy contracted by 5.8 percent in the first quarter this year. Between March 17 and May 10, the country was in lockdown to stem the spread of the coronavirus.

Now in its third week of de-confinement, France saw its economic activities resuming "cautiously but clearly" in major sectors, including industry, construction and services, according to INSEE.

As a result, France could limit loss in its economic activities in May to 21 percent below the normal level, instead of 33 percent as INSEE had estimated earlier this month.

In a separate statement, INSEE said consumer's confidence continued to deteriorate in May but at a slower pace. The index fell by two points to 93, after dropping by 8 points in April.

Households' opinion balance about the future standard of living remained at minus 71, the lowest level ever since the beginning of the survey, while fears about the unemployment trend have sharply increased by 18 points, reaching the highest level since June 2013, it added.

Speaking to Radio Classique, Economy and Finance Minister Bruno Le Maire confirmed that "the recovery is real but gradual."

"The shutdown (of economic activities) was severe. We must expect very degraded recession figures for 2020 in France," he said. "The violence of the economic crisis calls for a massive, frank and immediate European response."