France and Germany appeared on a collision course Tuesday over who should hold one of the European Union's most coveted jobs, after weekend elections across the 28-nation bloc redrew Europe's political map. 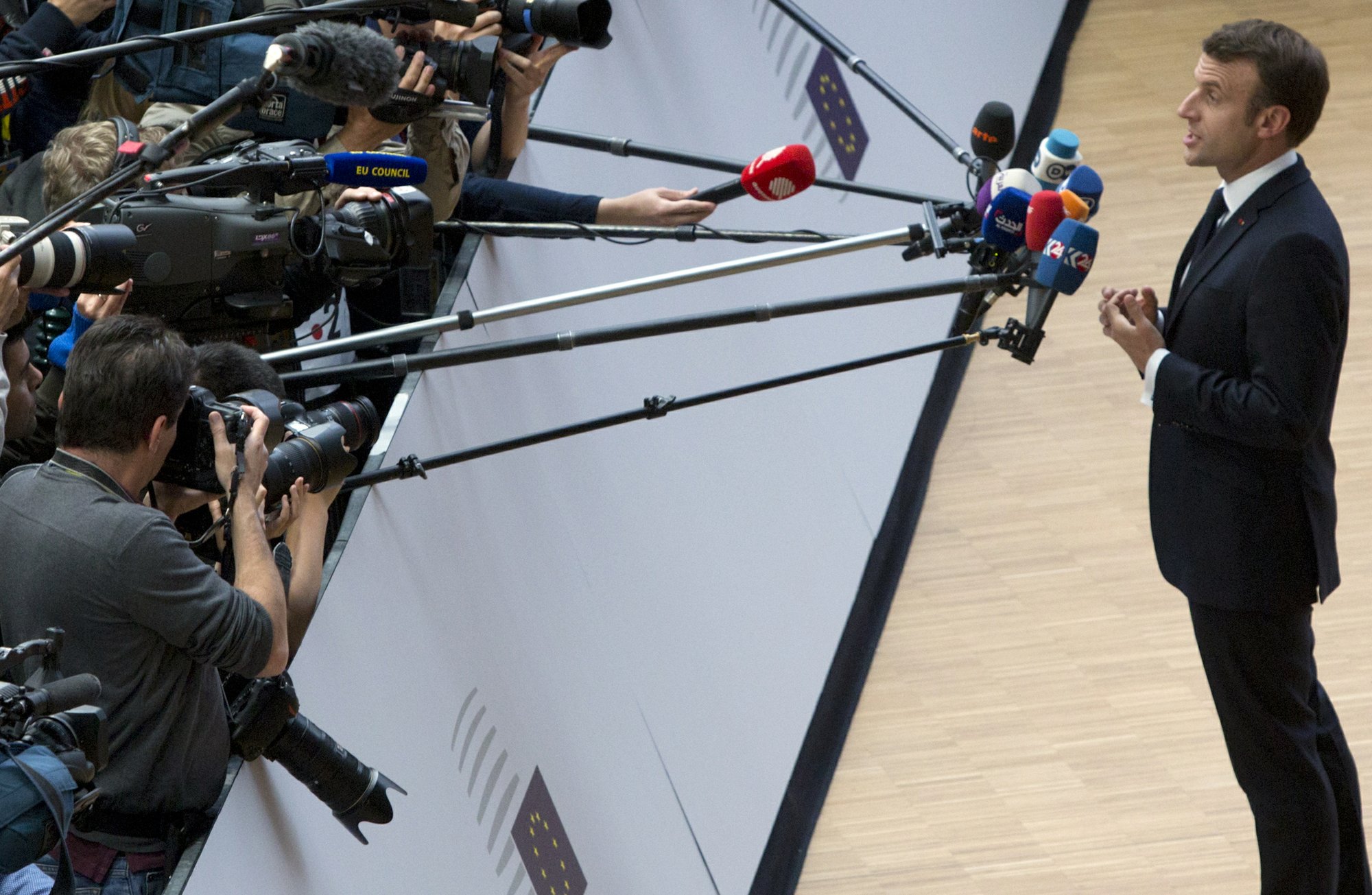 French President Emmanuel Macron speaks with the media as he arrives for an EU summit in Brussels, Tuesday, May 28, 2019. (Photo: AP)

Arriving in Brussels for an EU summit, French President Emmanuel Macron virtually ruled out the prospect of German politician Manfred Weber replacing Jean-Claude Juncker as the new president of the bloc's executive arm, the European Commission.

Juncker's term at the commission, which proposes EU laws and makes sure they're enforced, is due to end on Oct. 31 and leaders from across the continent are gathering in Brussels to debate who should succeed him.

Macron told reporters that his preferred choice for the post would be someone who has "experience either in their country or in Europe that allows them to have credibility and savoir faire."

That appeared to be a swipe at Weber, who has never served in government or a major institution like the commission. Weber, 46, has led the conservative European People's Party group — the biggest group in the EU assembly — since 2014.

Macron said Denmark's Margrethe Vestager, who is the commissioner responsible for competition matters, would be a suitable replacement as would Michel Barnier, the Frenchman who has led the EU's Brexit negotiations with the EU. Getting Barnier to head the commission would mark a fillip for Macron following the strong showing of the French far-right in Sunday's elections.

German Chancellor Angela Merkel, whose ruling coalition suffered losses at the polls, notably to the Greens, continues to back Weber.

"I as a member of the EPP family will of course work to support Manfred Weber," she said.

Both the EPP and center-left Socialists got battered in Sunday's elections as voters concerned about climate change, migration or security turned instead to the Greens, the pro-business ALDE group — of which Macron's party will now be a member — or far-right parties.

As a result, it's unclear what workable majority will emerge in the European Parliament when lawmakers gather in July.

EU leaders are also expected to discuss other top jobs in the bloc during their dinner later, including who will replace Donald Tusk as European Council President. Tusk, who chairs the meetings of EU leaders, is also due to stand down from his job at the end of October.

EU leaders are also expected to discuss who will replace Federica Mogherini as the bloc's next high representative — essentially the foreign minister — and who will succeed Mario Draghi as the next head of the European Central Bank.

The leaders want to move quickly. They hope to be able to name candidates to the top posts at their next summit on June 20-21.

"We want to find a solution as quickly as possible, because the European Parliament will meet at the beginning of July and it would of course be desirable if there were already a proposal at that point," Merkel said earlier in Berlin.

Early signs indicate that the process will take some time, and that a power struggle between the EU Council, which represents national governments, and the parliament is imminent.

No clear candidate for Juncker's post emerged from a meeting Tuesday morning among party group leaders at the parliament.

Instead, they insisted only that the person be chosen from among the candidates put forward by the parliamentary blocs. This puts them at odds with Macron, who is insisting that EU leaders should decide on who will head the commission.

Favorites for the top jobs are likely to be traded off to maximize influence over the world's biggest trading bloc. Nationality and gender are certain to influence the final choice.