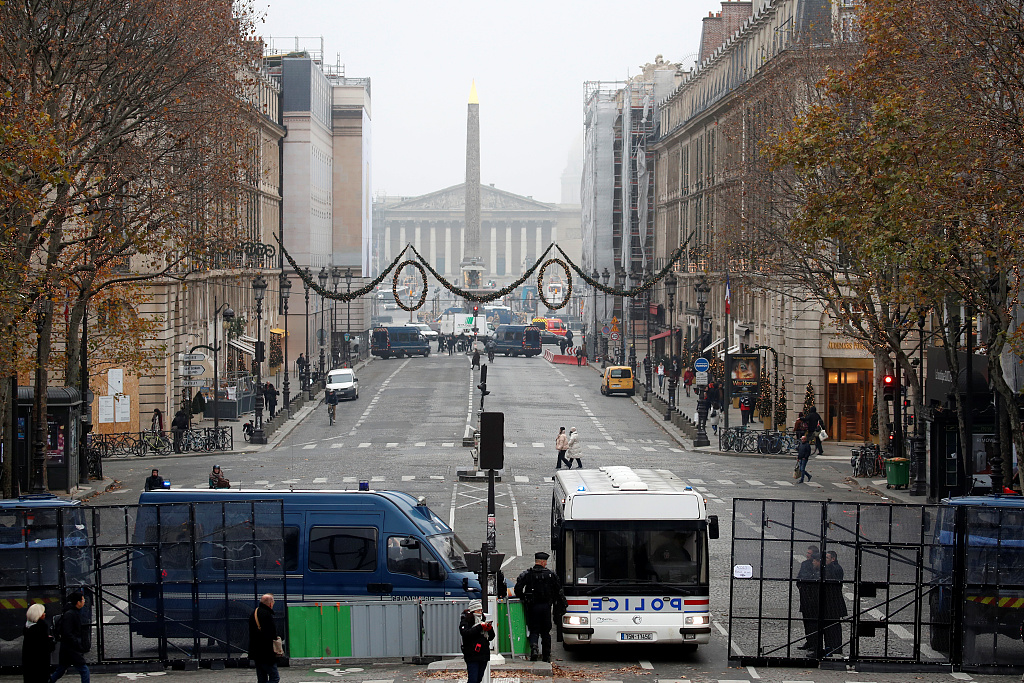 Photo: French police block a street to control access near the Place de la Concorde in Paris as part of a day of national strike and protests against French government's pensions reform plans in France, December 5, 2019. /VCG

Travellers across France endured a second day of chaos on Friday as unions vowed to keep up their strike until President Emmanuel Macron backs down on controversial pension overhauls.

Nine of the capital's 16 metro lines were shut and most others severely disrupted, sparking some 350 kilometres (220 miles) of traffic jams in the Paris region, well above the usual 200 km, the traffic website Sytadin reported.

Many employees were unable to get to work and several schools again provided only daycare, though fewer teachers were on strike compared with Thursday when some 800,000 people demonstrated across the country according to the interior ministry.

Bike paths were crowded with bikes and electric scooters, with metro operator RATP sponsoring special deals for commuters with a range of ride-hailing companies and other transportation alternatives.

The walkout is the latest test for Macron after months of protests from teachers, hospital workers, police and firefighters as well as the "yellow vest" movement demanding improved living standards.

Unions say his "universal" pension system, which would eliminate dozens of separate plans for public workers, forces millions of people in both public and private sectors to work well beyond the legal retirement age of 62.

Health Minister Agnes Buzyn said Friday that the government had "heard" the protesters' anger and would meet with union leaders to discuss the reform on Monday.

The government has yet to lay out the details of its plan, and Buzyn told Europe 1 radio that "there is indeed a discussion going on about who will be affected, what age it kicks in, which generations will be concerned -- all that is still on the table".

Yves Veyrier, head of the hardline FO union, warned Thursday the strike could last at least until Monday if the government did not take the right action.

But it remains to be seen if the protests will match the magnitude of the 1995 strikes against pension overhauls, when France was paralysed for three weeks from November to December in an action that forced the government to back down.

Macron, a former investment banker, has largely succeeded in pushing through a series of controversial reforms, including loosening labour laws and tightening access to unemployment benefits.

But this is the first time the various disgruntled groups have come together in protest.

So far Macron has not spoken publicly on the stoppages though a presidential official, who asked not to be named, said Thursday that the president was "calm" and "determined to carry out this reform" in a mood of "listening and consultation".

While most of Thursday's rallies were peaceful, police fired tear gas to disperse dozens of black-clad protesters smashing windows and throwing stones during the Paris march, with one construction trailer set on fire. Sporadic clashes were also reported in some other cities.

Many people were bracing for further disruptions over the weekend, including the prospect of fuel shortages as unions blocked most of the country's eight oil refineries.

The minimum pension age in France is 62, one of the lowest among developed countries, but there are 42 "special regimes" for railway workers, lawyers, opera employees and others offering earlier retirements and other benefits.

The government says a single system will be fairer for everyone while ensuring its financial viability while acknowledging that people will gradually have to work longer.