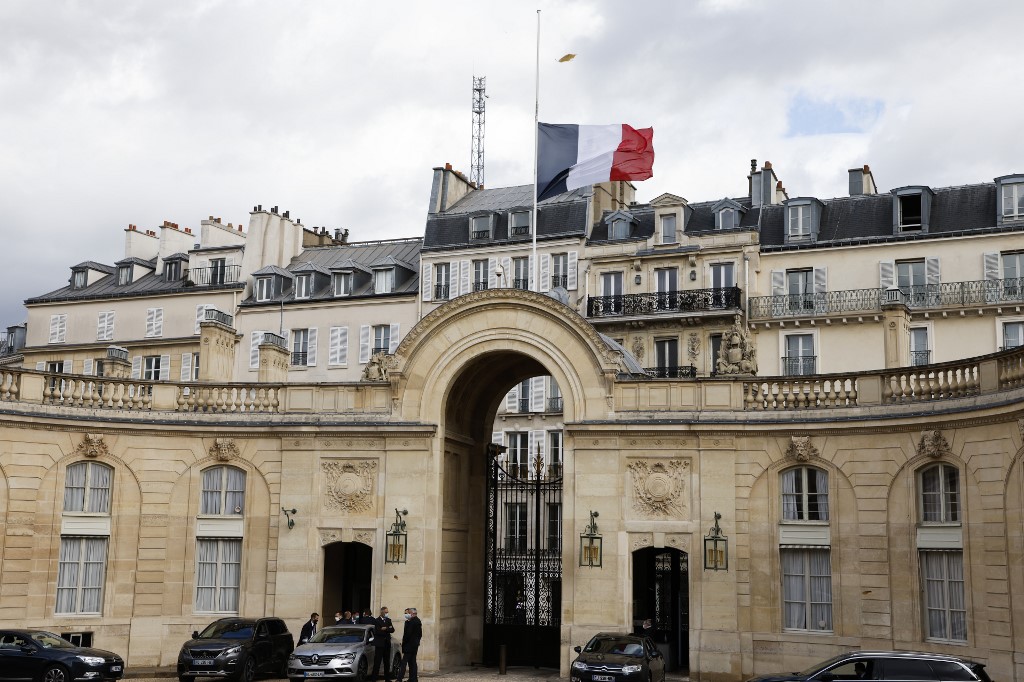 This photograph taken on October 21, 2020 shows the French flag flying at half-mast at the Elysee palace in Paris to pay tribute to slain history teacher Samuel Paty, who was beheaded by an attacker for showing pupils cartoons of the Prophet Mohammed in his civics class, on October 16, 2020, in Conflans-Sainte-Honorine, northwest of Paris. (Photo: AFP)

France will pay tribute Wednesday to a history teacher beheaded for showing cartoons of the Prophet Mohamed in a free speech lesson in a gruesome attack that has shocked the country and prompted a government crackdown on radical Islam.

Seven people, including two pupils, will appear before an anti-terror judge for a decision on criminal charges over the killing of 47-year-old history teacher Samuel Paty on Friday.

Police have carried out dozens of raids since the killing, while the government has ordered the six-month closure of a mosque outside Paris and plans to dissolve a group it said supported Palestinian militant group Hamas.

Paty was attacked shortly after leaving the junior high school where he taught in the suburb of Conflans-Sainte-Honorine outside Paris.

He had been the subject of an online hate campaign after he showed pupils cartoons of the prophet in a civics class -- the same images that sparked a bloody assault on the offices of satirical magazine Charlie Hebdo five years ago.

A photo of Paty and a message claiming responsibility for his murder were found on the cellphone of his killer, 18-year-old Abdullakh Anzorov, originally from the Russian region of Chechnya.

Anzorov tweeted images of the teacher's decapitated body before he was shot dead by police.

On Wednesday evening, Macron was to attend an official memorial with Paty's family and some 400 guests at the Sorbonne university in Paris, where he will posthumously award the teacher France's highest order of merit, the Legion d'Honneur.

Nine of 16 people held over the murder were released from custody late Tuesday, including four members of Anzorov's family and three school pupils.

Among those due to appear Wednesday was a disgruntled parent from Paty's school, who had fired up anger about his lesson through messages on social media, urging "mobilisation" against the teacher.

The parent had exchanged messages with Anzorov via WhatsApp in the days leading up to the murder.

The material he uploaded was widely shared, including by a mosque in the northern Paris suburb of Pantin, which the government will close Wednesday for six months for spreading material likely to provoke "hatred and violence".

Macron has also announced that a pro-Hamas group called the Sheikh Yassin Collective would be dissolved for being "directly implicated" in the murder.

The group's founder, Islamist radical Abdelhakim Sefrioui, is among those in custody over the murder. Interior Minister Gerald Darmanin has accused him and the school parent of having issued a "fatwa" against Paty.

Hamas said in a statement Wednesday it had "no links" to the collective and Sefrioui had no "organisational relationship" with the Palestinian movement.

The French government has earmarked another 50-odd other organisations with links to "radical Islam" for dissolution.

On Tuesday, in a phone call with his Russian counterpart Vladimir Putin, Macron asked Moscow for stronger cooperation in the fight against terror.

Russia has rejected any association with the killer.

Putin offered Macron his condolences over the "barbaric murder", according to the Kremlin, and the two leaders "reaffirmed their mutual interest in intensifying joint efforts to combat terrorism and the spread of extremist ideology."

Interior Minister Gerald Darmanin has vowed there would be "not a minute's respite for enemies of the Republic" in the wake of Paty's murder.

Paty's beheading was the second knife attack in the name of avenging the Prophet Mohammed since a trial started last month over the Charlie Hebdo killings in 2015 when 12 people, including cartoonists, were gunned down.

Also in custody are three of Anzorov's friends -- one of who allegedly drove him and another who allegedly accompanied him to buy a weapon.

The killing has prompted an outpouring of emotion and solidarity in France, with tens of thousands taking part in rallies countrywide over the weekend.

Thousands more took part in a silent march in the teacher's honour in Conflans-Sainte-Honorine on Tuesday.