After a string of protests in recent days, French Interior Minister Christophe Castaner announced the chokehold method "will be abandoned". 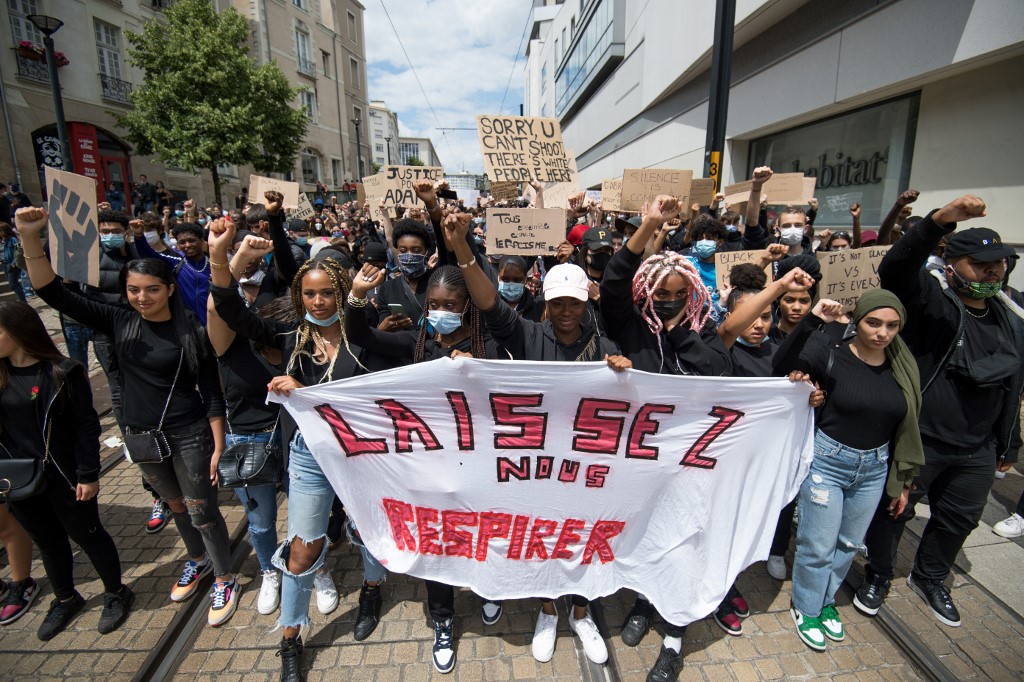 People wearing protective facemasks raise their fist and hold a placard reading "Let's us breath" as they demonstrate in Nantes, on June 8, 2020. (File photo by AFP)

"It will no longer be taught in police and gendarmerie schools. It is a method that has its dangers," he told a press conference.

He added there would be "zero tolerance" for racism in law enforcement and officers strongly suspected of racism would be suspended.

Castaner said too many officers "have failed in their Republican duty" in recent weeks, with several instances of racist and discriminatory remarks revealed.

"It is not enough to condemn it," said Castaner. "We have to track it down and combat it."

But police unions questioned the changes.

The impression given is that "everyone is nice except the police who are mean," said Philippe Capon of the Unsa-Police union.

Frederic Lagache on the Alliance Union said he feared that police will be reduced to "street fighting or the use of tasers".Earlier Monday, President Emmanuel Macron urged his government to "accelerate" steps to improve police ethics.

Former Prime Minister Manuel Valls said "the police are not racist", but racism, anti-Semitism and violence ran through society and the security forces "unfortunately do not escape these phenomena".

Macron met Castaner and Prime Minister Edouard Philippe on Sunday a day after some 23,000 people protested in several French cities to demand "justice" for victims of crimes allegedly committed by police.

The French demonstrations started in response to an expert report clearing the three officers who arrested Traore.

This was in spite of one of the officers having admitted the young man had been pinned to the ground with their combined body weight, and a report commissioned by Traore's family finding he had died due to the police intervention.

Traore's family said they had been contacted by the office of Justice Minister Nicole Belloubet on Monday inviting them to "have an exchange" on the case, but they refused.

"Adama Traore's family points out they expect legal advances are needed, not invitations to a discussion that would have no procedural purpose," a committee called "Truth for Adama" wrote on its Facebook page.

Some 20,000 people rallied in Paris last Tuesday to demand justice for Traore and Floyd, defying a coronavirus ban on public gatherings.

Floyd had similarly died after being pinned to the ground while under arrest.

The IGPN police watchdog said on Monday that complaints against officers rose by nearly a quarter last year, when officers were deployed for months of weekly "yellow vest" anti-government protests.

Activists say two dozen people lost an eye as police used rubber bullets to rein in the rallies, and five lost a hand to stun grenades.

This year, video footage showed a riot officer punching a bloodied protester held down on his back, another tripping a woman, and yet another firing a rubber bullet at point-blank range.

Macron has instructed Justice Minister Nicole Belloubet to look into Traore's death, and Castaner to step up measures to "improve the ethics" of the police force, the presidency said.