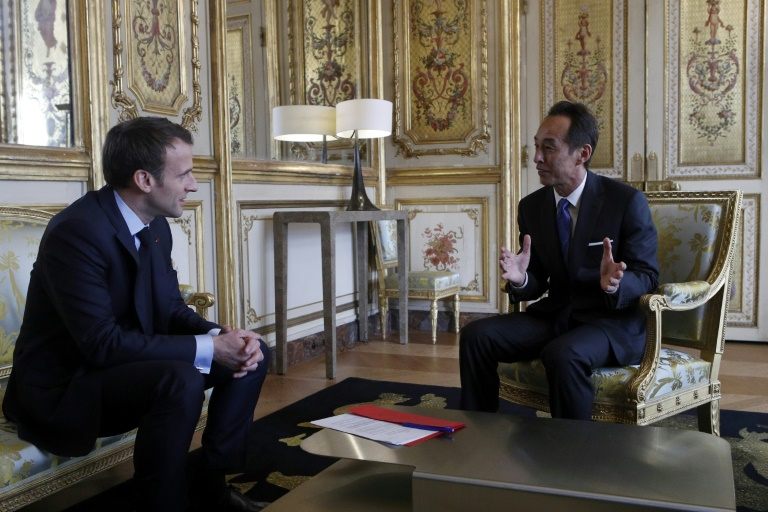 President Emmanuel Macron is to unveil Thursday a bold plan to make France a centre of reference for artificial intelligence research, aimed at drawing homegrown and foreign talent in a field dominated by US and Chinese players.

The proposals, which Macron's office said would be backed by 1.5 billion euros ($1.85 billion) in public funds, follow months of interviews with AI experts worldwide by star mathematician Cedric Villani, now a lawmaker in Macron's Republic On The Move (LREM) party.

Villani's report, presented Wednesday, calls for doubling the pay of young researchers and engineers, and tripling the number of students specialising in artificial intelligence over the next three years.

Macron hosted a dinner Wednesday for about a dozen AI specialists and industry leaders convened as part of a conference being held in Paris on Thursday, at which he was to outline his priorities.

Both Fujitsu of Japan and South Korean giant Samsung announced Wednesday that they would set up AI research centres in France, while Google said it would sponsor a dedicated AI chair at the country's elite Polytechnique engineering school.

Microsoft said it would invest $30 million in France, including at its Microsoft AI school opened this month, which is targeting 400,000 students over the next three years.

Also attending was Demis Hassabis of Britain's DeepMind -- creator of the AlphaGo system that in 2016 beat an elite human player of the Chinese game "Go" -- which will open in France its first European research centre.

"Much of the discussion centred on the best way to accompany the huge changes made possible by artificial intelligence and their ethical implications, and to ensure they are beneficial to humanity," said Marie-Paule Cani, who will hold Google's new AI chair, of the evening's exchanges.

The AI push dovetails with Macron's pledge to shake up the French economy and make the country more attractive to foreign investors, which has included business tax cuts and eased labour laws.

Samsung's research centre, its third largest in the world, will be headed by Luc Julia, the French researcher who co-invented Apple's voice-activated assistant Siri before decamping for Samsung.

Industry experts say that while France produces engineering talent widely sought after by companies and universities around the world, few French start-ups have managed to become top players in cutting-edge technologies.

To avoid diluting its efforts and resources, Villani's report urges the government to concentrate on four sectors: Defence and security, transport, the environment, and health.

Macron is also expected to propose a European framework for facilitating cooperation between researchers and sharing data, while addressing growing concerns about privacy breaches or the replacement of thousands of jobs by machines.

"We want France and Europe to be digitial champions in the service of humanity. That means for example a general rule on data protection," France's Digital Minister Mounir Mahjoubi told French daily Les Echos in remarks published Thursday.