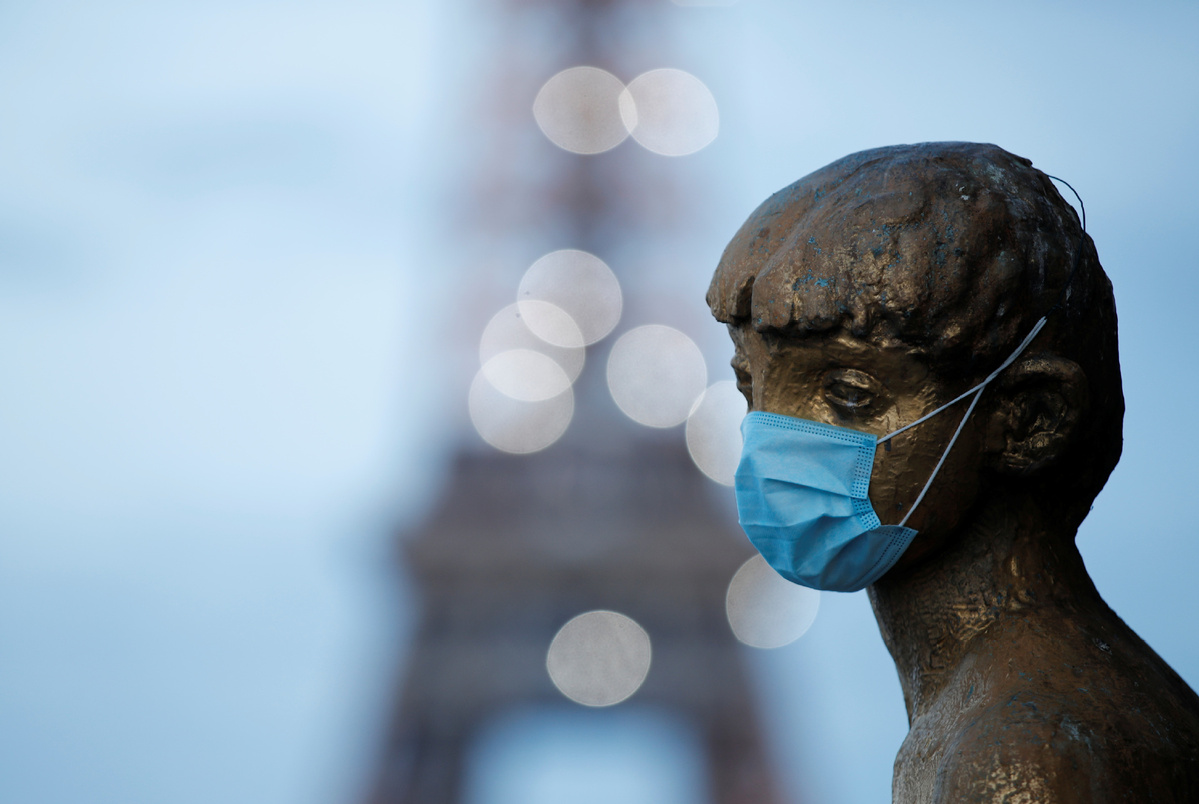 Golden Statue at the Trocadero square near the Eiffel tower wears a protective mask during the outbreak of the coronavirus disease (COVID-19) in Paris, France, May 2, 2020. (Photo: AP)

French health officials on  Saturday announced another 80 deaths from the new coronavirus, the lowest figure recorded over 24 hours since early April.

The figures for those in intensive care also fell, with 38 people admitted for critical care.

The death toll in France now stands at 26,310, one of Europe's highest.

Just four of the latest fatalities were registered in nursing homes, a spectacular fall compared with daily figures for recent weeks, against 76 who died in hospital.

France is on Monday due to begin relaxing confinement restrictions imposed eight weeks ago with health authorities now noting much reduced pressures on intensive care services compared to the height of the crisis.

In all, 22,614 sufferers remain hospitalised, including 265 new admissions on Friday.

A total of 95,829 people have been hospitalised since the start of the epidemic and to date 56,038 people have returned home following treatment.

"The epidemic remains active and is evolving and the virus is circulating in many zones across the country," France's health directorate general warned, saying social distancing must be kept up even as deconfinement begins.

Although France is hoping the worst may be over as it rolls back some restrictions parliament on Saturday evening definitively adopted a bill extending the country's health state of emergency until July 10.

The upper house senate had earlier backed the text despite some opposition fears that measures to track those infected with the virus and their contacts could infringe their privacy.

Data collated for the purpose will have to be discarded by law after three months.

As the daily death toll and case volume recedes France hopes relaxing restrictions can relieve virtual economic paralysis -- some 12 million employees have been furloughed, fanning fears of the biggest recession since World War II, despite there being no vaccine as yet.

Those who can continue to work from home will be encouraged to do so while those taking public transport will be obliged to don mask for their journeys.

Once at work, strict social distancing rules will apply and will continue to do so in shops.

"The situation remains tense -- we have precious little margin for manoeuvre," warned Philippe Juvin, head of emergency services at Paris' Georges Pompidou hospital, stressing the need to be ready to tackle a potential second wave outbreak.

Four French regions, including the Ile de France region encompassing Paris, remain coded red but virologist Marie-Paule Kieny said that "green" zones, while less at risk, were not yet out of the woods.

There remain concerns over the availability of sufficient numbers of face masks as the lockdown is scaled back but Interior Minister Christophe Castaner said the state would make 10 million available for distribution to users of public transport -- around half in the Paris environs.

Opposition lawmakers on Saturday blasted the poor quality of masks which the Paris city hall was to distribute to the elderly.

"They're not designed for old people and the distribution system is shocking," complained centre right city councillor Marie-Claire Carrere-Gee in a tweet. Another local legislator slammed the masks as being about as robust as "kitchen roll".

The city hall responded with a pledge to distribute surgical quality masks instead for the elderly.

Whether to reopen schools has been a hot potato issue but more than three-quarters are due to open their doors on Monday to around one million students, according to Health Minister Olivier Veran, although not all classes will return immediately.