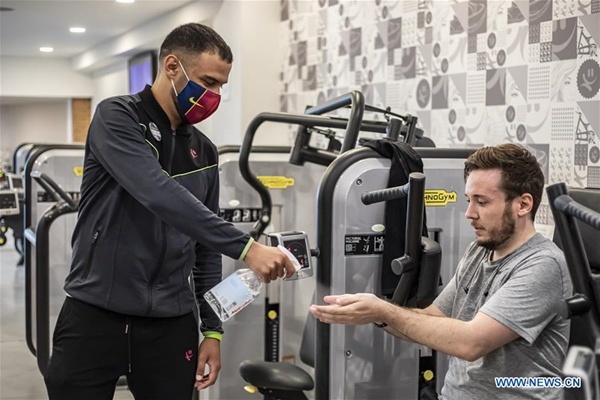 A staff member disinfects the hands of a customer at a fitness center in Lille, northern France, June 15, 2020. [Photo/Xinhua]

A total of 111 COVID-19 patients in France succumbed to the coronavirus-caused disease in the last 24 hours, bringing the total fatalities to 29,547, while hospitalizations further declined, the Health Ministry said Tuesday.

Of the deaths, 19,090 were registered in hospitals, a one-day rise of 38. At nursing homes and medico-social establishments, whose casualties are updated once a week on Tuesdays, 10,457 were reported dead, up by 73 from last week.

Currently, 10,535 patients are in hospitals, including 820 in intensive care. The two figures -- key indicators to evaluate the country's ability to cope with the epidemic -- fell by 217 and 26 respectively in the last 24 hours.

"The first epidemic wave is ending in Europe and in France's mainland. But the epidemic is far from over and the virus is still circulating," warned Health General Director Jerome Salomon, addressing the National Assembly's investigative committee.

"We must anticipate a resurgence, even a second epidemic wave in autumn or winter. Failure to prepare for a second wave would be a major mistake," he stressed. "Vigilance and caution must remain in place."

Salomon added, "the whole world was surprised by this totally new, massive, rapid, brutal global crisis. No country is spared."