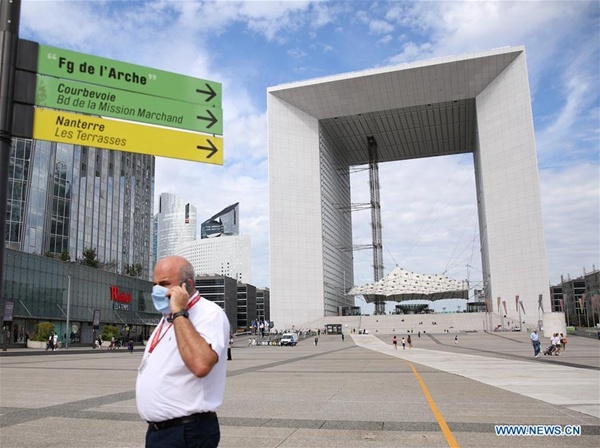 A man wearing a face mask makes a call at the La Defense business area near Paris, France, Aug. 20, 2020. [Photo/Xinhua]

Further 5,429 patients have tested positive for the COVID-19 on Wednesday in France, marking the highest daily spike in four months, the country's Health Public Agency said.

Coronavirus-related fatalities and hospitalizations were not updated due to technical problem.

As of Tuesday, 30,544 patients have succumbed to the respiratory illness. Some 4,600 others were hospitalized, of whom 410 needed ventilator.

France saw an average daily infections of above 4,500 in the first half of April when the virus was accelerating and the epidemic started to overwhelm hospitals, after the government put its 67 million population under strict lockdown to contain the outbreak.

Since May restrictive rules had pushed down infections to below 1,000 before resurgence during summer holidays.

Speaking to France 2 television early Wednesday, Jean-Francois Delfraissy, head of the scientific council that advises the government on the pandemic, expressed "fears of a second wave in November."

"We are in a borderline situation in France where there has been an acceleration of the virus circulation since the beginning of August like in Spain, Italy and Germany," he said.

Delfraissy asked the French people to learn to live with "long-lasting epidemic", stressing that now "the objective is to limit the virus spread in the area where it circulates too much."