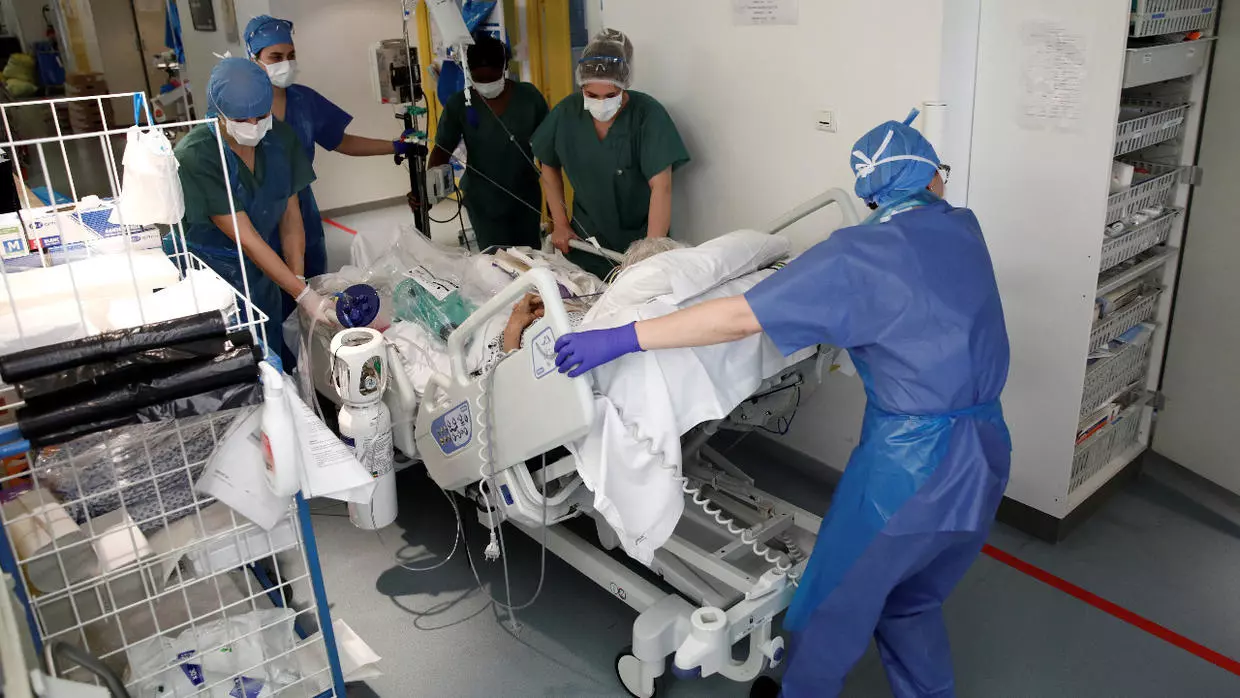 PARIS, April 9 (Xinhua) -- French hospitals registered a one-day loss of 424 COVID-19 patients, taking the total toll to 8,044, while some 4,166 elderly people living at nursing homes had died of the virus since the epidemic began, a health official said on Thursday.

In total, 12,210 patients succumbed to the COVID-19 compared with Wednesday's 10,869 which did not update human loss reported in retirement homes due to a technical problem, according to figures unveiled by Health General Director Jerome Salomon.

Some 86,334 people had tested positive for the virus, up by 4,334 in one day. Including infections reported in retirement homes, the figure rose to 117,749, Salomon told a daily conference on the epidemic.

Admissions in intensive care units (ICU), considered "an important indicator" to evaluate pressure on hospitals, reported a decline for the first time since the epidemic began. Some 7,066 infected people need intensive care on Thursday, an 82 decline in the last 24 hours.

"The balance is for the first time slightly negative. So we can hope for a plateau, but it is a very high. We have to be careful," Salomon said.

Salomon noted that even if some relief in emergency services was noteworthy "the epidemic will only drop when there are fewer patients in hospital."

The confinement imposed since March 17 "begins bearing fruit," he said. "So, it's absolutely essential to continue the lockdown. Stay at home. The first slowing seen is linked to your good respect of the confinement rules."

On April 7, France entered its fourth week of nationwide confinement. Tough restriction on people movement would likely be maintained for further two weeks to stem the virus spread.

President Emmanuel Macron will address the nation next Monday, his third televised appearance in less than one month, to unveil a new batch of measures to contain the coronavirus epidemic and cushion its severe economic fallout.

In its report released on Wednesday, French central bank BdF estimated that every two-week confinement would lead to a 1.5 percent loss in the gross domestic product (GDP).

The coronavirus pandemic has hit hard local businesses in tourism and manufacturing, with the country's economic activity tumbled by 32 percent since the lockdown began.

Adding to that, strict instructions to limit people movement had negatively impacted local demand, one of the main growth engines in the domestic economy.

"These figures could change as the economic situation and businesses' need of support change rapidly. We are doing everything to save our businesses," Le Maire said.

As almost all sectors are at halt and because of costly measures to help local firms to be back on the recovery track, Le Maire expected the French economy to shrink by 6 percent for the whole year of 2020.

"This is the biggest recession in France since 1945. Unknowns remain and this forecast may still change, particularly with regard to the duration of confinement and the terms to lift it. This is crucial: the longer the confinement is, the lower the growth will be," he added.

The government predicted the budget deficit would hit 7.6 percent of the GDP this year, in its second update to the 2020 budget it will present next Wednesday, according to Budget Minister Darmanin.

"We will be over 170 billion euros of budget deficit, while we had forecast 93 billion in the initial finance law. This is higher than that of post-financial crisis of 2010 ... This figure may still change," Darmanin said.

France's previous deficit record dated back to 2009 when the eurozone's second largest economy recorded a gap at 7.2 percent of the GDP during the global financial turmoil.

"The economic recovery will be long, difficult and costly. It will require efforts from all the French," Le Maire said.  (1 euro = 1.09 U.S. dollar)