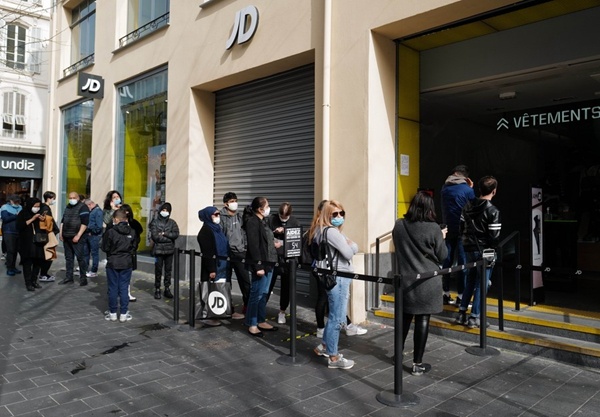 People line up to enter a boutique in Nice, capital of coastal department of Alpes-Maritimes, southern France, on Feb. 23, 2021. (Photo: Xinhua)

As of Wednesday, France's cumulative number of COVID-19 infections totalled 3.66 million. Some 85,321 patients have died so far, after 277 more lost their lives to the virus in the past 24 hours.

Some 25,614 cases needed treatment in hospital, 46 fewer that Tuesday's figure. Of those hospitalized, 3,436 were put on ventilators, almost stable from a day before.

"The epidemic situation is deteriorating in our country...The epidemic has stopped decreasing and in some places it can even increase," said Health Minister Olivier Veran.

"We erased in one week the two consecutive weeks of decline that we had recorded so far," he added during a visit to the northern city of Dunkirk, where the incidence rate rose to over 900 per 100,000 residents per week, nearly nine times the national average.

Around 10 of France's 102 departments are now in a "very worrying situation" which requires "rapid and strong measures," said Gabriel Attal, the government's spokesperson.

"All our efforts must continue to avoid having to decide on a new national containment, but there is no certainty that we can avoid that," he told a weekly briefing on the sanitary situation on Wednesday.

Unlike some of its neighbours, France has decided against a new lockdown, betting on nightly curfew and boosted vaccination campaign to bring the epidemic under control.

A night-time ban on people's movement, in force since mid-December, was brought forward by two hours in the French territory on Jan. 16 to reduce social mixing.

As of Feb. 23, some 2,656,447 people have received their first doses of vaccines, and over 1.13 million others have completed their inoculation, according to figures released by the Health Ministry.

The government aims to vaccinate up to 4 million vulnerable people and frontline workers later this month, before extending the campaign to nearly half of the 67 million inhabitants by the end of May, and inoculating the entire population before September.

As the world is struggling to contain the pandemic, vaccination is also underway in many other countries with the already-authorized coronavirus vaccines.

Meanwhile, 255 candidate vaccines are still being developed worldwide -- 73 of them in clinical trials -- in countries including Germany, China, Russia, Britain and the United States, according to information released by the World Health Organization on Tuesday.